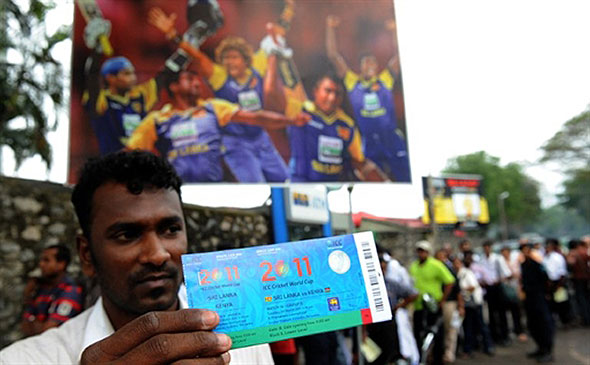 February 7, 2011 (Island Cricket): After confusion and panic at the Sri Lanka Cricket (SLC) headquarters in Colombo today, where hundreds of cricket fans gathered to purchase ICC World Cup 2011 tickets priced at Rs. 50 and Rs. 100, only to be told that there had been an misunderstanding and only pre-reserved tickets were being issued, the World Cup secretariat has now issued a statement clarifying the sale of the said tickets.

Last October, SLC announced that fans would be allowed to reserve premium priced tickets ahead of time. It was stated, at the time, that the reserved tickets will be available for pick-up during the first week of February. However, several hundred individuals gathered outside the offices of SLC this morning attempting to purchase tickets priced at Rs. 50 and Rs. 100.