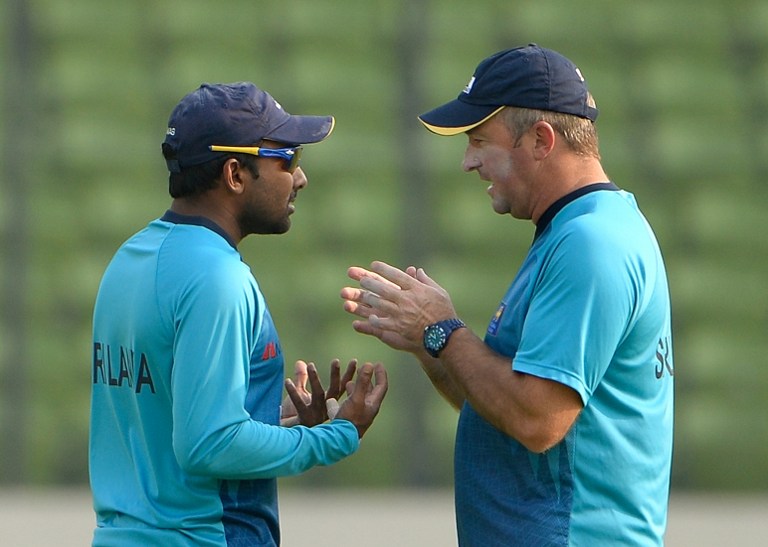 Sri Lanka coach Paul Farbrace could be in line for a job with England. © AFP

Sri Lanka’s head coach Paul Farbrace has been interviewed for the role of assistant-coach by the England and Wales Cricket Board (ECB) and is contemplating a move back to his native England after serving only four months of his two-year contract with Sri Lanka Cricket (SLC), according to a report on a British newspaper.

After Farbrace took over from Graham Ford earlier this year, Sri Lanka won both the Asia Cup and the T20 World Cup.

"Farbrace has been interviewed this week by the [ECB] and is pondering a move back to England to be an assistant coach," The Telegraph reported.

Former Sri Lanka head coach Trevor Bayliss, who Farbrace worked under as Sri Lanka’s assistant-coach from 2007 to 2009, has "impressed ECB officials" and is expected to be interviewed again today, according to the report.

Both Bayliss and Farbrace were in the Sri Lankan team bus when the team was attacked by armed gunmen in Pakistan in 2009.

Earlier this week, in an interview with the Daily Mail, Farbrace said that he was not ready to be head coach of England but Bayliss would be better suited. He however did not deny that he was interest in accepting the assistant-coach vacancy with the ECB.

Sri Lanka’s cricket board has had a poor track record in their dealings with overseas coaches.

During their tour to England and Scotland in 2011, interim-head coach Stuart Law abandoned the touring parting midway through their tour, citing the uncertainty surrounding his employment. The financially-struggling, government-appointed interim-committee in charge of SLC at the time had appointed their assistant-coach Law as a temporary head coach for months after Bayliss’ contract had ended and were also falling behind on paying salaries.

The following year, Australian Geoff March was fired by SLC just a few months after signing a two-year contract. Marsh initiated legal proceedings later and SLC were forced to pay out an undisclosed sum to settle the matter out of court.

Farbrace was unreachable for comment at the time of writing.