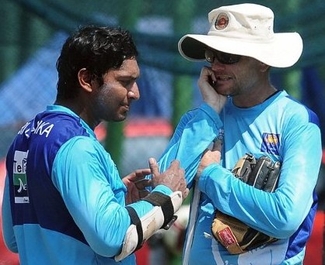 The recently concluded series between England and Sri Lanka is the worst Test series in Kumar Sangakkara’s 108-match career.

The left-hander started the series as the world’s number-one ranked Test batsmen but only managed a highest score of 21 runs, which saw him lose pole position in the rankings. Sangakkara is now in fifth place in the ICC rankings for Test batsmen.

The former Sri Lankan captain averaged just 8.75 and could only muster up 35 runs in the two-match Test series – his worst series in terms of both runs and average.

Pior to this series his debut series against South Africa in 2000, where he averaged 16.60 in three Test matches, was his worst performance.

Sangakkara made two ducks in his four innings against England (0,14,0 and 21) and was dismissed twice each by James Anderson and Graeme Swann.

Unlike previous three-match Test series, where he was able to rectify poor starts to the series with notable innings in the final Test match, the series against England – the number-one ranked Test team in the word – had been cut down to just two Tests in order for Sangakkara and other Sri Lankans to feature in India’s lucrative domestic T20 tournament – the IPL.