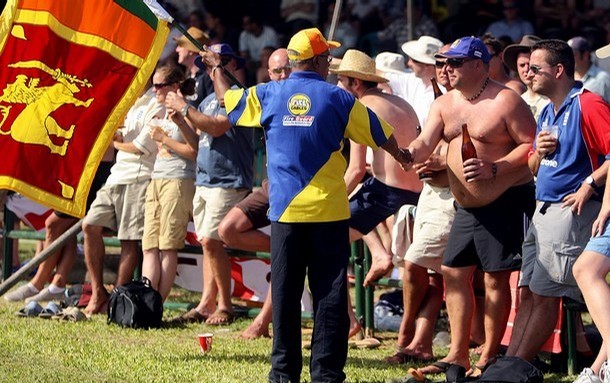 England fans have expressed their shock and dismay at ticket prices set by Sri Lanka Cricket (SLC) for the upcoming two-Test series between England and Sri Lanka.

Tourists looking to purchase a ticket for a single day’s play can expect to fork out as much as Rs 7500 (US$ 58).

"It leaves a bad taste in the mouth, as this level of discrimination has not been seen before and was not publicised in advance for people buying plane tickets," an outraged John Smart from South Wales told Island Cricket today.

Smart and his wife are regular visitors to Sri Lanka and have visited the island over a dozen times for business, pleasure and charity work since 2003. They now intend on catching the action at Galle for free, from the towering ramparts of the Galle Fort located outside the stadium.

The cheapest ticket on offer for tourists is priced at Rs 5000 ($ 39) per day while locals, Smart says, have cheaper options and discounted pricing.

The financially-struggling SLC did not utilise a similar pricing structure when they hosted Australia last September, which will likely see fans segregated by nationality.

An SLC official confirmed to Island Cricket on Friday non-locals would not be allowed to purchase general admission tickets, which are usually priced at less than two dollars.

However, reports earlier today said president of SLC Upali Dharmadasa had confirmed the cheapest ticket on offer for all attendees is Rs 5000. But shortly after, further adding to the confusion, chairman of the tour organising committee Asanga Seneviratne told ESPNCricinfo: "Tickets are priced at LKR 5000 and LKR 1000 and anyone can purchase them. There are no restrictions."

The new ticket policy has already paid off for the island’s cricket board.

"The amount raised so far is a record," Seneviratne told the Daily Financial Times in Sri Lanka on Friday, referring to ticket sales. "With few more days before the matches, we hope the final figure will be higher."

England fans are disappointed and feel duped by the manner in which they had been left in the dark about the sudden change in SLC policy, which was only announced after many of them had already purchased their airline tickets.

The first Test between England and Sri Lanka gets underway on March 26.