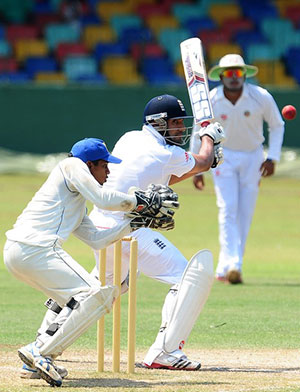 England pulled off an unlikely win against Sri Lanka Development XI in Colombo today after chasing down 359 to win.

England have now won both their warm-up fixtures on tour and head into the two-Test series confidently.

Earlier in the day, Tim Bresnan in his third delivery of the morning removed opener Dilshan Munaweera, LBW, for 33. Kushal Perera followed nine balls later after edging it to wicketkeeper Prior off Steven Finn. After lofting Graeme Swann over the ropes for six, Thilina Kandamby was bowled by Swann for 13 soon after, leaving Sri Lanka at 77/4.

Angelo Perera batted well and benefited thanks to some loose bowling on offer. He remained unbeaten on 90 runs and shared an unbroken stand of 122 runs in 15 overs with Kaushal Lokuarachchi who made 40.

England opened their batting with Pietersen and Bell. The first wicket fell in the fifth over when Bell edged one down the leg side to be caught behind. Pietersen brought up his 50 off 49 balls and was bowled for 52 by leg-spinner Lokuarachchi. Bopara and Prior batted passed tea but Bopara was eventually caught and bowled by left-arm spinner Sajeera Weerakoon for a steady 66.

Prior meanwhile raced away to 50 in just 36 balls. He was bowled off the inside edge for 84 runs by Vishwa Fernando to leave England at 248/4. After Bresnan’s wicket fell, Patel helped himself to the innings’ fourth half century but there was still plenty of work left to be done. England needed 68 to win with 10 overs remaining.

Patel began attacking the bowlers with several lusty blows but was bowled by Tharanga Lakshitha for 72. Stuart Broad and Swann, who made a valuable 31 not out off just 12 balls took England home.