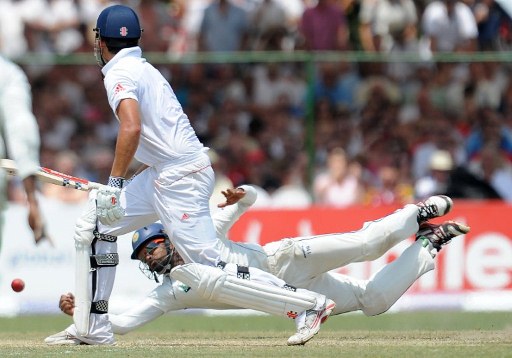 If there’s one man Sri Lanka want to dismiss early, that’s England vice-captain Alastair Cook. The hosts dismissed the Essex batsmen cheaply in the first Test at Galle but yesterday he proved that his concentration powers and patience could hurt the opposition.

By stumps yesterday, Cook’s four-hour snail-paced knock had brought him 77 runs. He had faced in the process 257 balls and was involved in a 122-run stand with captain Andrew Strauss for the first wicket.

Lahiru Thirimanne wasn’t a happy man at close of play yesterday, as he had dropped Cook when he was on 20 off the bowling of Rangana Herath. It could become a drop that he regrets.

Since the Ashes series down under 15 months ago, where he was Man of the Series, Cook has been prolific. The left-hander has converted his six hundreds into big knocks which includes an unbeaten double hundred in Brisbane, followed by match winning knocks of 148 in Adelaide and 189 in Sydney. A few months later, came his career best score of 294 at Birmingham against India.

"We could have held onto that catch off Cook I know but sometimes chances are missed," Sri Lanka’s vice-captain Angelo Mathews told journalists yesterday.

"If we had taken that catch it would have been different. But nevertheless he batted well and held his nerve. We need to get his wicket early tomorrow."

Cook is at his best when he plays the waiting game like he did in the Ashes opener in Brisbane in November 2010. After England had gone to Australia with lot of optimism, the first couple of days gave you an indication that it was going to be another sorry campaign by them down under, where they had not won an Ashes series for 25 years. England were bowled out for 260 in their first innings and big hundreds by Mike Hussey (195) and Brad Haddin (136) had given Australia a lead of 221 runs.

England had to ensure they survived for two days and Cook batted on and on, finishing in the end with a match saving, unbeaten 235 having batted for over ten hours to save the game for the tourists. England went onto retain the Ashes, their first win in Australia in quarter of a century.

Cook scored 766 runs in the Ashes series and after the triumph he received the ‘Freedom of the City of London’, a tradition that has been in existence since 1237. By receiving the honour, an individual is allowed to drive his sheep over the London Bridge or be drunk and disorderly in the city of London without fear of arrest.

England spinner Graeme Swann, who finished with four wickets in the first innings, was hopeful that Cook will go onto score big.

"Hopefully he will get a double hundred and will leave it for the bowlers to finish things off," Swann said.