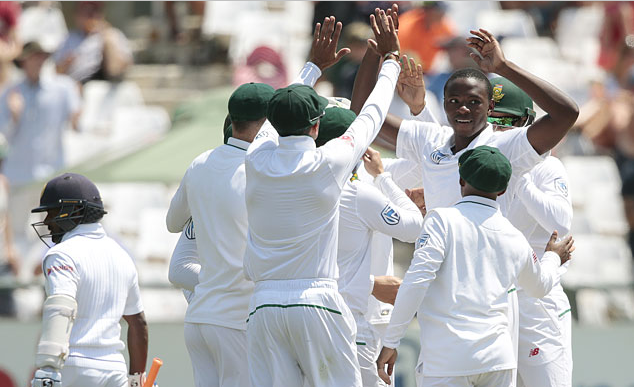 Sri Lanka were bowled out for 110 and South Africa closed the day with a formidable lead of 317. © AFP

South Africa reached a well above par total of 392 in their first innings before bowling out the hapless Sri Lankan batsmen for just 110. South Africa then made their way to 35/0 at stumps, with an overall lead of 317 at the end of day two.

Sri Lanka's reckless approach saw their batsmen throw away their wickets with adventurous strokeplay, which can be best described as irresponsible batting. To have been bowled out this cheaply highlights a lack of application by the entire top order, who were dismal and embarrassing.

The standout for the Proteas was undoubtedly Quinton de Kock who, in search of quick runs, was able to notch up his third Test century. His knock contained 11 fours and came off just 124 balls, as he looked to play a Gilchrist-esque role in the morning session.

Sri Lanka made a respectable start in response, with the openers safely negotiating a tricky new ball spell from Vernon Philander and Kyle Abbott. But Faf du Plessis was not about to make the same mistake as Angelo Mathews had when he brought himself on to bowl gentle medium pace the previous day. The South African skipper instead brought on a genuine strike weapon in the form of Kagiso Rabada.

Rabada had immediate effect, with Kaushal Silva edging back onto his own stumps for 11. It was 31/1 and would soon become 56/2 when Kusal Mendis top-edged a sweep to JP Duminy to fall for 11 as well. Keshav Maharaj, the successful bowler, was elated, as he howled screams of joy in the direction of Mendis and de Kock.

That was where the slide began, and the mighty South African attack pounced. Sri Lanka went on to lose eight wickets for 54 runs, statistically their worst-ever collapse against South Africa.

The set Dimuth Karunaratne was the next to fall, only three balls after the tea break. It was an awful delivery from Rabada that deserved to be put away, but Karunaratne played the slashing cut off the tiniest bottom edge of his bat and it was beautifully claimed by Temba Bavuma, who had earlier leapt beautifully to almost make a run out chance out of nowhere.

At 59/3, South African skipper du Plessis wasted an LBW review off Dhananjaya de Silva but would have been relieved when he claimed the edge of Mathews's bat a little later, again off the bowling of Rabada. It was 60/4 and South Africa were on fire.

What made then made the situation tougher for Sri Lanka was reverse swing. However, de Silva refused to play within himself, dancing down the track to Maharaj and lofting him for a beautiful boundary over mid-wicket before then back cutting him away for another four. But he fell LBW to his nemesis shortly after, and despite using a review for a close call, he was still on his way for 16.

Upul Tharanga was brought in for the out of form Kusal Perera and finished his stay unbeaten on 26. But that was only after Chandimal had edged Rabada behind, playing a drive at a ball which was, yet again, so wide that it was in another postcode by the time it reached the edge of his bat.

Herath added 22 for the seventh wicket with Tharanga before he was LBW to Philander, who to that point had toiled well without reward. Herath may have felt unlucky as the ball was bouncing very high, but nonetheless it was clipping the stumps so the verdict remained with the umpire's original call of out.

Philander then removed Suranga Lakmal. Stephen Cook dropped the edge in the slips but managed to palm it up high enough for Amla to snare a second grab and leave Sri Lanka 100/8. Tharanga and Kumara then struck a couple of boundaries before Kumara was bowled by Philander for four and Pradeep granted du Plessis his second catch off Philader to fall for a duck.

Demoralised after their paltry total of just 110, Sri Lanka's bowlers failed to claim a wicket towards the end of the day, with Cook not out on 15 and his partner Dean Elgar not out on 19 at stumps.