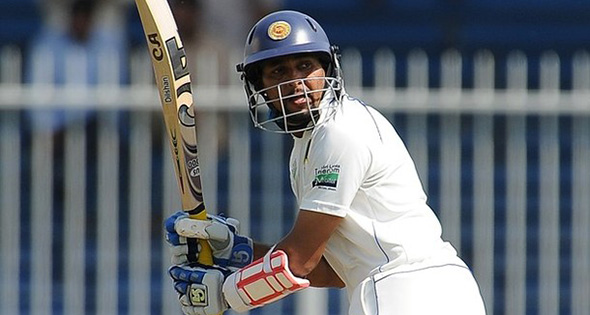 Tillakaratne Dilshan has made just one Test century since 2009
By Damith Samarakoon | April 7, 2012

When Dilshan throws his wicket away, Sri Lanka’s middle order is exposed to the new ball. © AFP/File

The importance of opening batsmen can often be overlooked. But just as it’s important to have bowlers who can take 20 wickets in a match, a good allrounder, a cogent number three and an astute leader in the make-up of a competitive Test side; a reliable opening combination too is crucial.

Throughout cricket’s history, teams that excelled consistently have relied on a good opening pair. Gordon Greenidge and Desmond Haynes, Jack Hobbs and Herbert Sutcliffe, Matthew Hayden and Justin Langer and Chetan Chauhan and Sunil Gavaskar come to mind. And more recently, Alastair Cook and Andrew Strauss have combined well for England as well. The openers form your frontline against the opposition and while their importance can easily be overlooked, it cannot be denied.

The role of Sri Lanka’s opening batsmen today appears to be unclear. At the heart of the issue is Tillakaratne Dilshan.

Dilshan’s career was reignited in 2009 when he was asked to open. You can’t fault a man for taking his opportunities and Dilshan reeled off the runs at an average of almost 65 that year. Since then though, he has been either hit or miss. The 35-year-old is the senior opener in the side and his inconsistency has hurt Sri Lanka badly.

Since the lofty heights of 2009, Dilshan has only scored one century. While centuries from an opener are important, the issue has been the scores in-between. In 19 of his 28 innings as an opener since January, 2010, he has failed to score more than 35 runs. This has meant that Sri Lanka’s opening pair have only gone past 35 runs on 13 occasions out of 30 innings in that period. That is a failure rate of nearly 60-percent.

Poor starts figure prominently in every one of Sri Lanka’s defeats in the last year. They have been unable to reach a competitive total in their first innings, with scores over 300 being scarce.

Dilshan might not be at fault entirely for those losses or the paucity of big totals. But as the senior opener, he plays a significant role in providing his number three and the middle order a platform to build on.

Kumar Sangakkara has virtually become an opener in the past 12 months. This is one of the reasons why he has developed a dangerous trend in starting a series so poorly. As a number three, it is indeed a workplace hazard one should expect. But when you are consistently being put under pressure early on, failure is just around the corner. It hasn’t helped that Mahela Jayawardene has also been out of touch. But that again only personifies the importance of the openers’ role in getting Sri Lanka off to a solid start.

Dilshan was never a natural opener. He plied his trade in the middle order for years, where he would generally come in against the spinners and the older ball. With opening the innings, comes the challenge of technique and adaptability. As soon as there was movement in the air or off the pitch, Dilshan’s attacking abilities were going to be tested. A poor run against several teams with good opening bowlers backs this up. He is also a confidence man. Lack of runs for him perhaps leads to self doubt. That doubt can leave any batsman unable to trust his own instincts. If one recalls, in the Test series against Australia last year, the lack of self belief made him drop himself down the order.

However, the problem with the openers doesn’t begin and end with Dilshan. Since the era of Sri Lanka’s most successful opening pair Sanath Jayasuriya and Marvan Attapattu, Sri Lanka have not found the perfect combination. Michael Vandort, Upul Tharanga, Jehan Mubarak, Malinda Warnapura, Tharanga Paranavitana and Lahiru Thirimanne have all featured in the last few years.

A consistent opener cannot be produced overnight, which appears to be what the selectors had been hoping for when you look at their track-record. A young, inexperienced opening batsman will need time to fit into this highly specialised role in order to figure out his limitations and strengths at the highest level. This is especially true in Sri Lanka’s case, where the step up from playing first-class cricket, against average bowlers, on dead pitches does not compare to facing-up to bowlers in the international scene.

The selectors have two important decisions to make.

One, is to ear mark a young player who they think is capable, which currently Thirimanne is, and give him the opportunity he needs to develop. Thirimanne has shown that he can score runs at this level with his innings in the tri-series in Australia and the ODI series in South Africa. And while opening in Tests is vastly different, Thirimanne has to be provided a prolonged opportunity to prove himself. Constant tinkering with the openers’ slot has also negatively impacted Sri Lanka.

The second decision to be made revolves around Dilshan. Presently, Sri Lanka’s openers appear to work with no plan or direction. And plans are important. England coach Andy Flower uses his openers to take the shine off the new ball. They are not worried about scoring quickly like Australia was in the last decade. Their role is to see off the new ball and give Jonathan Trott, Ian Bell and Kevin Pietersen the opportunity to build a massive first innings total from where Strauss and his bowlers can control the game. Dilshan, when on song, offers an incredible dynamism to Sri Lanka. He can score quickly to give Sri Lanka’s bowlers more time than was needed when Muttiah Muralitharan was around to bowl the opposition out. But it is his style of play that is also hurting the team at the moment.

Too often does Dilshan throw his wicket away, mindlessly throwing his bat at every ball. One can no longer look away and say ‘well, that’s how he plays’, as India are now finding with Virender Sehwag. Can Sri Lanka afford to lose that significant opportunity by dropping him down the order and relying on a more sedate but hopefully more solid combination? If so, do the selectors have the patience to back up a new opener in what will be a steep learning curve? Based on past evidence, you shouldn’t be holding your breath.

What Sri Lanka ‘s selectors choose to do about Dilshan and the openers is a crucial part of this re-rebuilding phase under Jayawardene. Sri Lanka won in Galle after find themselves at 14-3 and 15-3. Don’t count on that happening very often.

Damith Samarakoon blogs regularly at www.theflyslip.net. You can listen to his podcast here.