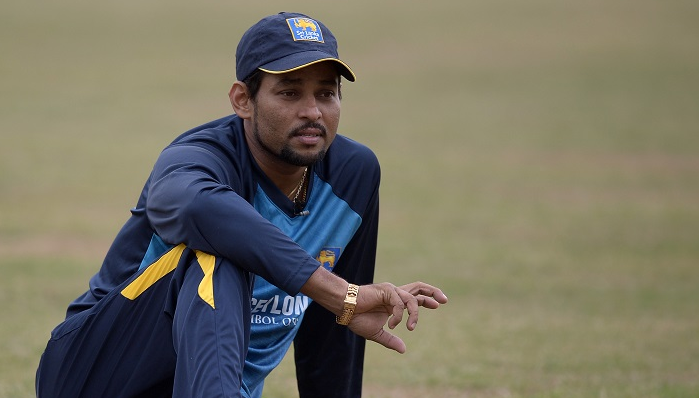 Tillakaratne Dilshan was appointed captain in 2011 and was replaced by Mahela Jayawardene the following year. © AFP

Retiring veteran Tillakaratne Dilshan has revealed that he was forced to bring to an end his stint as captain in 2012 by the then chairman of selectors.

In a recent interview in Sinhala with the TV channel Ada Derana, Dilshan said he was given a choice to quit captaincy or be removed.

"I received a call from chairman of selectors Ashantha de Mel and he said: 'Dilshan you should voluntarily give up captaincy or you will be removed'," Dilshan disclosed. "The selectors had spoke to Mahela [Jayawardene] first before they contacted me."

Jayawardene, who quit captaincy in 2009, took over from Dilshan in 2012 in a radical overhaul that saw coach Geoff Marsh also sacked.

Mahela Jayawardene and Tillakaratne Dilshan at the press conference in Colombo in January 2012 after Dilshan announced he was relinquishing captaincy. © AFP

Dilshan claimed in his interview that he had no support from senior players in the side when he captained and added that, to this day, he does not speak to some of his team-mates, but refrained from naming players.

"I have had personal problems with some players, and even now, I do not speak to some cricketers, but I never took those personal issues on to the cricket field," Dilshan said.

Dilshan was handed captaincy when Kumar Sangakkara stepped down after the 2011 World Cup without warning.

After a poor run as captain, with the exception of one historic Test win in South Africa, Dilshan came under criticism for his leadership as a result of Test and ODI series losses on tour in England, against Pakistan in the United Arab Emirates and in South Africa.

After being appointed captain in 2011, Sri Lanka played 11 Test matches and 21 ODIs under Dilshan. They lost five Tests and won one in that period, while in the ODI format they lost 13 ODIs and won eight.

Dilshan's batting too had dipped with the added burden of leadership. His ODI batting average as captain was 20.95 and his Test average was 33.60, which was in contrast to his career averages prior to captaincy.

The 39-year-old, who retired from Tests in 2013 and ODIs last month, is set to retire from T20Is at the end of the upcoming series against Australia, which will bring to an end an illustrious international career that saw him score over 10,000 ODI runs and more than 5000 Test runs.

(Video) I was forced to quit as Sri Lanka captain: Dilshan drops bombshell