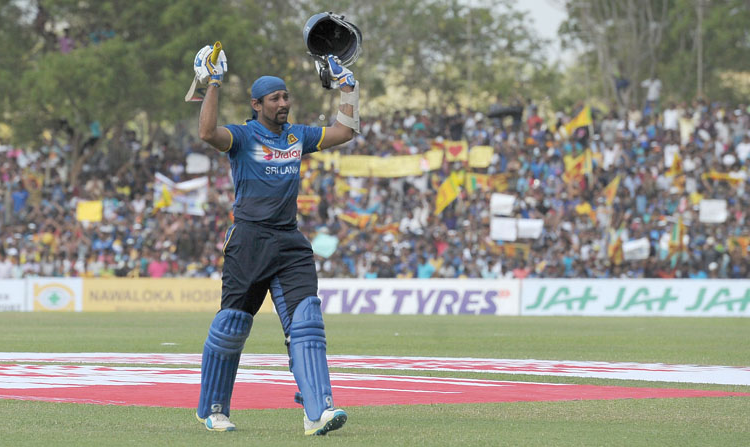 Veteran Tillakaratne Dilshan retired from ODIs after the third match of the series against Australia in Dambulla on August 28, 2016. © AFP

Tillakaratne Dilshan's career was one of two entirely different halves. He began the first phase of his career late in 1999, making both his Test and ODI debut against Zimbabwe. In just his second Test, batting at number-five, he scored an unbeaten 163 in Harare. Sri Lanka notched up a six-wicket win against a team containing the Flower brothers, Henry Olonga and Alastair Campbell.

But, from there, success with the bat proved to be few and far between for the young Dilshan. He, however, soon cemented his reputation as one of the world's most-explosive fielders. It took until 2006 for Dilshan to register his maiden ODI century, coming in a world-record total at the time of 443 against the Netherlands.

The real turning point in Dilshan's career came in 2009, when he was promoted from the middle-order and began opening the batting for Sri Lanka. He scored Sri Lanka's fastest Test half-century (against Pakistan), won the Man of the Tournament award in the World Twenty20 in England and smashed four ODI centuries, showing unbelievable consistency across all three formats that year.

In this 'second-half' of his career, he struck 11 of his 16 centuries from the period 2009-2013, and all but one of his ODI centuries also came in this period. Dilshan has scored more runs than any other batsman after reaching 35 years of age. Incredibly, six of those 11 centuries came in 2009.

It truly was the greatest of golden summers for Dilshan. Not only did he reinvent his career at the top of the order, he also helped Sri Lanka to the 2009 World Twenty20 final, with 317 runs at an average of 63.40.  He also invented the now-famous 'Dilscoop', where he deliberately ramps the ball over his head and over the top of the wicket-keeper.

Dilshan's off-spin was of the more-economical variety in the middle overs, but he could also be relied upon to open the innings with the ball as well as the bat, as he did during the first final of the Commonwealth Bank ODI series in Australia in 2012, where he snared the early wicket of David Warner.

Dilshan also kept wickets for Sri Lanka, and did so famously in a winning series against Pakistan, performing with aplomb behind the wickets, easily picking the variations of Rangana Herath, as the wily spinner took 4-15 on the final morning of the Test. Sri Lanka claimed a narrow 50-run win.

Although the great Sachin Tendulkar actually retired a few years after the 2011 World Cup, the tournament was seen as something of a swansong for the Indian batsman, but it was Dilshan who topped the run-scorer's list, with exactly 500 runs from nine matches.

His best effort in that tournament was unquestionably in the quarter-final at Colombo. Sri Lanka had fielded poorly all match, as England scraped to a tricky total of 229 on a turning wicket, however, Dilshan and fellow opener Upul Tharanga (102 not out) made mincemeat of the target, with Dilshan scoring a Man of the Match 108 not out. Sri Lanka coasted home by 10 wickets.  It was at the time the highest total chased down without losing a wicket in one-day matches.

Following the 2011 World Cup, Dilshan was appointed captain of Sri Lanka. Kumar Sangakkara had stepped down. Fans and media critics questioned Dilshan's potential for the leadership role but, by and large, he led from the front, making his highest Test score on the biggest stage of all.

Batting with a broken thumb and leading the side on his first overseas tour as captain, Dilshan scored 193 at Lord's. Later in the year, after Sri Lanka had failed dismally in the first Test, Dilshan successfully captained Sri Lanka to their sole Test victory in South Africa with a resounding 208-run win, during the Boxing Day Test in Durban. What is more remarkable about the series-levelling win was that Muttiah Muralitharan, Sri Lanka's legendary spin spearhead, was not in the side.

Mahela Jayawardene reassumed captaincy following Dilshan's short stint, but Dilshan's value to the team did not diminish as his batting reflexes waned. Rather, he remained one of the team's most valuable fieldsmen, and his off-spin was utilised cleverly in the middle overs of ODIs. As a batsman, he now started his innings slowly before building to a crescendo during the death overs.

The prime example of this came in Sri Lanka's unsuccessful 2015 World Cup campaign. Although the team was kicked out at the quarter-finals, Sri Lanka smashed Bangladesh by 92 runs in the group stages. At the cauldron of the MCG, Dilshan scored an ODI career-high 161 not out, timing his innings perfectly and exploding in the last five overs to ensure he was top-scorer. Sri Lanka were able to coast to a total of 332/1.

Wicket-keeper, off-spinner, opening batsman, middle-order stalwart and record breaking captain. There was nothing Dilshan did not do for his country.