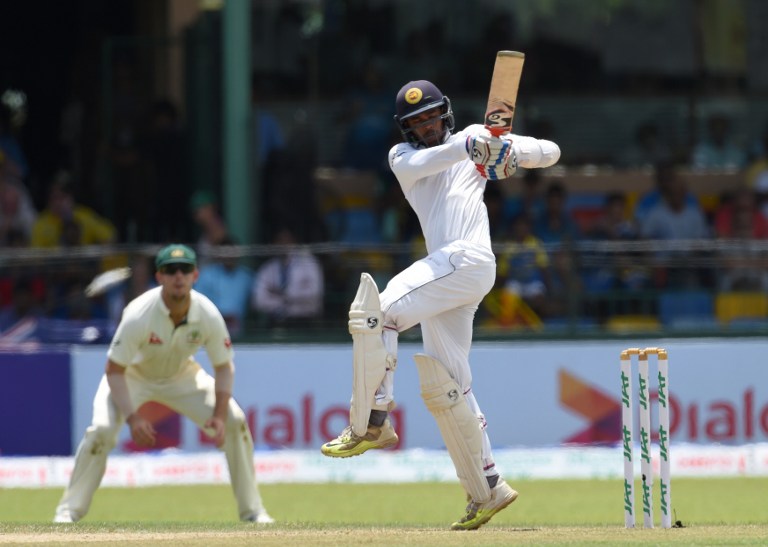 Dhananjaya de Silva finished the three-match Test series against Australia as the top run-scorer of the series. © AFP

Sri Lanka have unearthed a lot of talent during their recently concluded Test and ODI series against Australia, but no diamonds have shone as brightly as debutant Dhananjaya de Silva.

The 25-year-old de Silva has stunned with his consistency and talent in both the long and short forms of the game. He topped the run-scoring charts in the Test series, with 325 runs at 65 across three Tests against Australia, and notched up a career-best 76 in the ODI series.

The Test series was far closer than the 3-0 scoreline revealed. Although Sri Lanka managed to whitewash Australia for just the fourth time in Australia's history, both batting line-ups suffered from monumental top and middle order collapses.

The major difference between the two teams was that, at most times, there was someone at the crease for Sri Lanka to ensure they reached a respectable total. More often than not, it was de Silva.

In Sri Lanka's lowest score of the series — 117 all-out on the first day of the tour — de Silva was top-scorer with 24, and got off the mark in striking fashion, registering his first runs in Test cricket with a six. His runs came off just 38 balls and he also struck three boundaries.

In the second innings, with Sri Lanka leading by just 117 runs, de Silva added 71 for the sixth wicket with Kusal Mendis (176) to rub salt into Australia's wounds. His 36 enabled Sri Lanka to eventually reach a lead of 268.

Rangana Herath and Lakshan Sandakan then bowled Sri Lanka to victory, and de Silva contributed with the ball this time, getting the crucial wicket of Peter Nevill to break a record partnership that had lasted nearly three hours on the final day.

As the darkness closed in, Sri Lankan fans would have been getting worried as Nevill and Steve O'Keefe batted on and on, denying the bowlers the vital breakthrough. Then, de Silva snuck one past the edge of Nevill's bat and it was gleefully accepted by Dinesh Chandimal, as Sri Lanka knew they were one strike away from a historic win.

In the second Test, de Silva again made a solid contribution to Sri Lanka's decent first innings total of 281 on the first day. Sri Lanka were 199/5 when de Silva came to the wicket, but his patient 37 from 63 balls saw Sri Lanka to 265/8, when he was finally dismissed LBW by Jon Holland.

He later dominated a 50-run stand with Dilruwan Perera (64) in the second innings, scoring 34 before he was caught behind by Nevill off the bowling of Mitchell Starc.

But it was the the third and final Test in Colombo where de Silva saved his best for. Before, he had made useful starts and hung around in vital partnerships without going on to a big score, this time however he took control in the dead-rubber match to lead Sri Lanka to a 3-0 win.

Although Herath was Man of the Match, de Silva was easily the top-scorer for the match with 194 runs for once out.

In the first innings, Sri Lanka looked like they would struggle to reach 100, when they found themselves at 26/5, but de Silva added 211 with Chandimal. He finished the day unbeaten on 116, before eventually falling for 129.

In the second innings, with Sri Lanka already having a handy 200-plus lead at 246/6, de Silva helped them reach a total of 347 with some lusty blows, early on the fifth and final morning of the series. His 65 not out came off just 74 balls, with 10 boundaries and a strike rate of 87.83.

In the ODI series the opportunity arose to show off his full range of strokes, and he did so while opening the batting in the fourth match, smashing 76 from 87 balls and top-scoring for his side before he was out in the 28th over.

Whilst in the Tests he had been an offside-dominant player and batted in the middle order, during the ODI series de Silva showed his finesse on the leg side and displayed an array of strokes at the top of the order, as he continued to impress the home fans.

As a handy fieldsman, partnership-breaking off-spinner and becalmed middle-order batsman, there is no doubt the future looks bright for de Silva.

At 24 years of age, he is a bit on the older side for an Asian debutant, but time is still certainly on his side if he wants to make an impact on the development of this young Sri Lankan team.