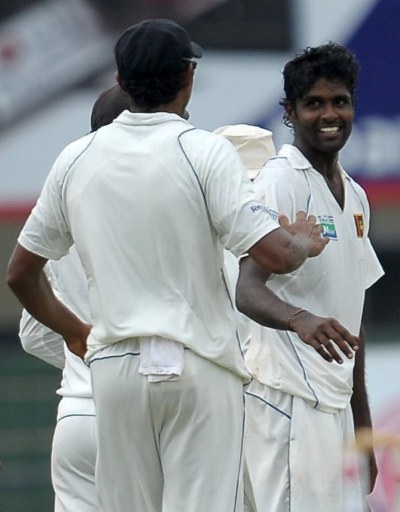 September 16, 2011 (Island Cricket): In a desperate attempt to record a Test win against Australia, Sri Lanka made three changes to the side that drew the second Test at Pallekele, and took another bold decision to bowl first after winning the toss. The home team did well to restrict the tourists to 235 for five when bad light forced an early end to the first day’s play of the third Test Match at the Sinhalese Sports Club ground yesterday.

However, with Michael Hussey, who has accumulated 315 runs in the series so far, unbeaten on 63; the honours were even on the first day.

Of the three changes the Sri Lankan selectors made, one was to give Chilaw-born fast bowler Shaminda Eranga his debut, and he went onto show that there’s no dearth of fast bowlers in the country. Only mismanagement of them once they hit the big league, due to opportunistic player agents, who sell them for 30 pieces of silver to Indian liquor barons. Injured fast bowler Nuwan Pradeep Fernando is a case in point.

Eranga, who was flown in from England halfway through Sri Lanka’s A tour, was presented with his Test cap by Kumar Sangakkara, the veteran who was playing his 100th Test Match. The 23-year-old became the 118th player to represent the country in Test cricket.

He got off to a sensational start claiming a wicket off the first ball in Test cricket, becoming the 18th player to do so, and the second Sri Lankan after Chamila Gamage, who did it against Bangladesh. Incidentally, Eranga had picked up his first ODI wicket off his second ball, during the ODI series against the Australians.

It wasn’t the best shot by Shane Watson, who hit a wide delivery straight to Tillakaratne Dilshan at backward of point. Eranga also dismissed Australian captain Michael Clarke, who fell for another poor shot, but the pressure had been built up nicely to create that wicket with some tight bowling.

Suranga Lakmal too had a good outing giving Sri Lanka the early breakthrough in the second over of the innings, when the under fire opener Phil Hughes played on.

A 79-run stand followed between Shaun Marsh and Ricky Ponting before the latter’s patience ran out. Lakmal had him caught behind two runs short of his half-century, with the batsman attempting a big drive.

Australia had taken the big decision to stick with Shaun Marsh at number three after his debut hundred at Pallekele, pushing Ponting to number four, and the left-hander cashed in on a good wicket with 81 runs. Marsh had a hundred for the taking before a lapse of concentration saw him playing Rangana Herath for turn, but the ball went straight through to peg back the stumps. His 81 came off 207 deliveries and seven fours.

Sri Lanka desperate to square the series, implemented three changes to the side that played at Pallekele. Off-spinner Suraj Randiv and leg-spinner Seekkuge Prasanna were left out of the side, but the biggest decision the selectors took last morning was to leave out middle order batsman Thilan Samaraweera, who averages 86 at SSC.

Promising opener Lahiru Thirmanne was brought into the side, and will open batting with Tharanga Paranavithana, sending captain Dilshan to his original position of number five.

For Australia, Ponting was back after missing the second Test due to family commitments. The tourists dropped Usman Khawaja, while fast bowler Ryan Harris, the highest wicket taker in the series, was ruled out with injury – Peter Siddle replaced him.

A combination of rain and bad light allowed only 81 overs of play yesterday.