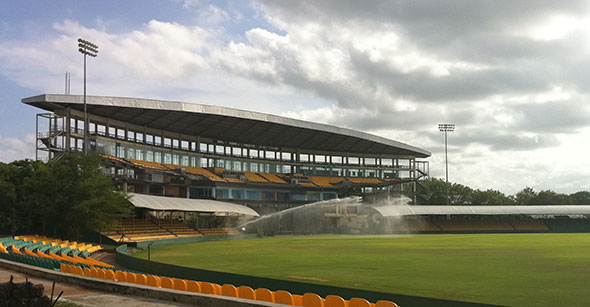 The Rangiri Dambulla International Stadium has not seen any cricket since 2010. © Shehan Kankanamge

While the Sri Lankan board has invested millions to construct new venues, the picturesque cricket stadium in Dambulla is being neglected due to "petty politics", according to a report in a local newspaper.

The 30,000 capacity stadium last hosted an international fixture in 2010 and has since been unused and neglected.

"The Rangiri Dambulla International Stadium was the brainchild of former board chairman Thilanga Sumathipala, the bête noire of the current administration," Sri Lanka’s The Island newspaper reported this week, suggesting that Sri Lanka Cricket (SLC) was intentionally ignoring the venue because it was constructed at the behest of the then cricket board president Sumathipala.

Sumathipala had a last-minute change of heart ahead of the SLC elections earlier this year and dropped out of the race for president, paving the way for Upali Dharmadasa, who is a close associate of Sri Lankan president Mahinda Rajapaksa, to win the election uncontested.

The report on The Island says he was "allegedly forced to withdraw from the race [because] the ‘guardians’ of the sport felt that he was ineligible to hold office, as he had conflicts of interests."

SLC’s overlooking of the Dambulla stadium has become a talking point in recent days, as the first two matches of the ongoing tour to the island by New Zealand have been marred by rain.

Dambulla is located in the dry zone and was built by Sumathipala’s administration to minimise the impact of the island’s wet seasons.

There has also been criticism of the lights at the venue in the past, with claims that it was not upto international standards. But critics argue that the board has invested millions in the construction of two new venues and the refurbishment of the R. Premadasa Stadium for last year’s ODI World Cup, that replacing the lights at Dambulla should not have been too financially daunting.

However, SLC secretary Nishantha Ranatunga told the Sri Lankan newspaper Daily Mirror in July that the board had no ulterior motive in not allocating matches to Dambulla and was "in the process of trying to work something out." He added that due to the prevailing financial crisis, SLC needed to be "careful" with its spending.