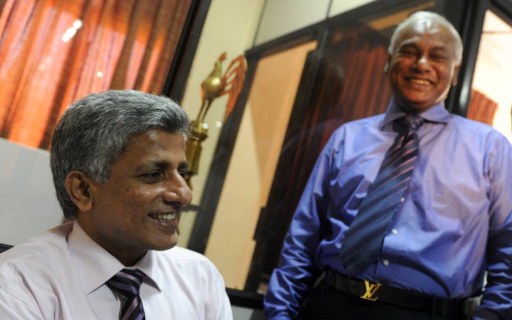 However, president of SLC Upali Dharmadasa told BBC Sinhala the cricket board did not award CSN local television rights to broadcast cricket matches because the channel was owned by the president's sons.

"Are we supposed to reject a company because it is an organisation owned by the president's sons," Dharmadasa asked.

Dharmadasa insisted the deal between CSN and SLC was struck without any political influence and that proper tender procedure was followed. He also revealed that CSN agreed to pay more than the actual bid price they offered in their tender after SLC held discussions with the channel.

"Nothing illegal or unlawful has taken place," Dharmadasa maintained.

But lawyer J.C. Weliamuna, the former head of Transparency International Sri Lanka, said the state had lost approximately 3000 million rupees in revenue as a result of awarding rights to CSN for 125 million rupees.

Dharmadasa rejected this claim and added that such a bid was impossible to imagine, as there will only be a limited number of tours by international teams within the next three years.

The SLC president also refuted the notion that there was a conflict of interest in chief executive of CSN Nishantha Ranatunga being permitted to contest for the post of SLC secretary. According to Dharmadasa, Ranatunga was allowed to contest in the SLC election by the island's sports minister.

This article originally appeared on BBC Sinhala service. It has been translated to English and republished here with permission from the author.