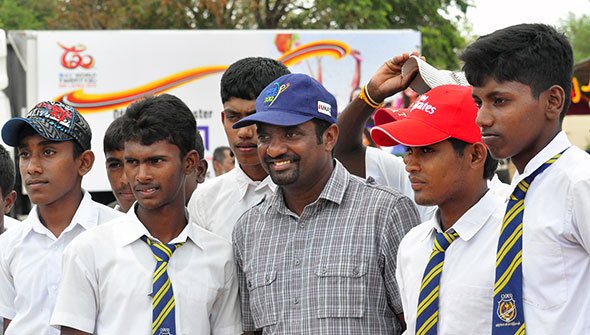 Muttiah Muralitharan poses for photos with children in northern Sri Lanka who flocked to watch the matches. © Murali Cup

The northern province of Mullaitivu has emerged from 30 years of conflict and hardship and Sri Lankan spin legend Muttiah Muralitharan, with assistance from Mahela Jayawardene and Kumar Sangakkara, is trying to help develop better cricket facilities in schools and promote sports in the region.

The recently concluded Murali Harmony Cup 2012 Twenty20 tournament, which was staged to promote community-building and friendship in post-war Sri Lanka, was organised and conducted by Muralitharan’s charity the Foundation of Goodness, along with assistance from the International Cricket Council, Red Dot Tours and the Sri Lanka Army.

The tournament featuring under-19 and under-23 cricketers was played at five grounds across northern Sri Lanka in the towns of Jaffna, Oddusuddan, Mankulam, Kilinochchi and Vavuniya from September 8-12.

"Seeing the kids from Jaffna playing in the final on Wednesday was really inspiring," Muralitharan said, speaking at the conclusion of the tournament.

"They played with passion and skill, and they showed that we have to do all we can to develop cricket in the north to help both reconciliation and the Sri Lanka national team."

Muralitharan said that he was encouraged by the number of enthusiastic spectators who had turned up to witness the matches.

"They loved the whole experience and are hungry for more cricketing events," he said. "Hopefully, with the opening of the new IODR Oval this will be possible."

The highest wicket-taker in Test and ODI cricket believes that the game can "flourish quickly" in the previously war-ravaged north with small investments aimed at achieving realistic goals.

"It will take time to develop cricket [here], but even with small investments in basic cricket infrastructure like concrete cricket nets and coconut matting in each school we will see the game flourish quickly, as the kids will start playing," Muralitharan added.

"I think we must focus on simple, achievable improvements that we can deliver quickly."