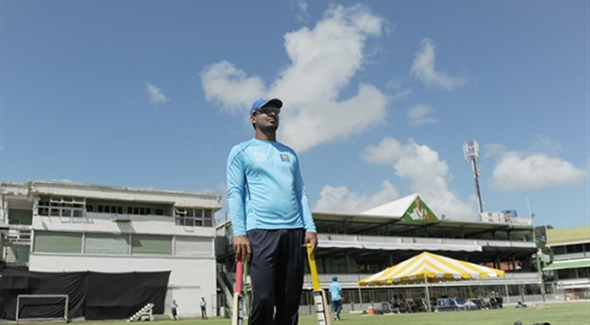 Kumar Sangakkara hopes his side can create history with their first ODI series win in Australia this time around. AFP PHOTO/Indranil MUKHERJEE.

November 02, 2010 (Island Cricket): After a mediocre tour last time in Australia, where they lost the Test series 0-2 and won only two of the eight ODIs, Sri Lanka will be confident following some good warm-up games and a win in the T20 game in Perth on Sunday as the three-match ODI series against Australia gets underway at the magnificent Melbourne Cricket Ground (MCG), the home of Australian cricket, today.

Australia’s preparations was hampered after captain, Ricky Ponting, ruled himself unavailable for the series opener to attend to his grandmother’s funeral in Launceston, Tasmania.

"I won’t be playing tomorrow’s game. My grandmother down in Launceston has passed away," the Australian Captain said yesterday before beginning a media briefing at the MCG.

"The funeral is down in Launceston tomorrow. I’ll be flying out tomorrow morning to attend the funeral and then flying straight back to the ground tomorrow afternoon."

Australia, however, will be boosted by the return of middle-order batsman Mike Hussey, off-spinner Nathan Hauritz and left-arm seamer Mitchell Johnson, all of whom were rested for the T20 International.

"A player of Ricky’s calibre not being in the side is a huge blow to anyone. He’s been one of the best batsmen in the last two decades or so. I am not sure how it will affect the Australians, but for us the important thing is to think about us and make sure that we do the processes right and getting the combination right for the match," Sri Lanka’s skipper Kumar Sangakkara told journalists.

Sri Lanka, despite having played many series in Australia, haven’t been able to win a series here. Their best efforts in Australia were reaching the finals of the 1995 tri-nation series under Arjuna Ranatunga and a decade later under Marvan Atapattu.

"We look forward for each game with lot of anticipation. Whatever happens in this series, it’s going to be a great experience for us. We are playing the best One Day side in the world, and we are out here to take up that challenge, and see whether we can come on top of it," Sangakkara said.

Sri Lanka will be confident leading up to the game after successive wins in warm-up games and Sunday’s win in Perth.

"Confidence is good, but at the same time we understand that this is a different format so basically we try to go back to the drawing board and see whether we can do better, and expect Australia to come back stronger after the T20 defeat," Sangakkara added.

Most Sri Lankans won’t have fond memories of the MCG. Muttiah Muralitharan, in particular, was no-balled for throwing by umpire Darrel Hair at the MCG in front of over 55,000 spectators during the Boxing Day Test Match in 1995.

Whether the off-spinner will play the game, in case Sri Lanka opt to play just one spinner, after Suraj Randiv won the Man of the Match award, Sunday, was asked of Sangakkara, but the captain dismissed any such speculations.

"Murali is guaranteed to play whenever he is in our side. It’s a great luxury to have a player like him in our side. He’s enjoying his cricket. He’s a lot happier that he doesn’t have to bowl 30 overs in a Test Match anymore. We’ll see how he goes. As long as he enjoys, we are happy to have him in the side," Sangakkara said.