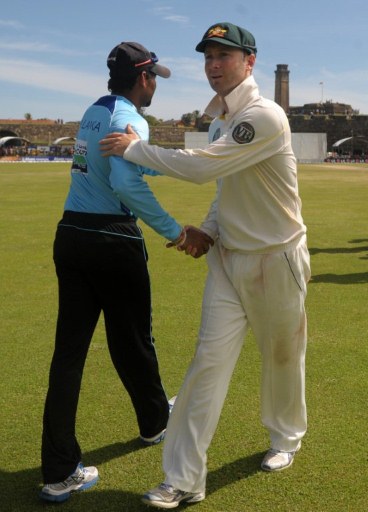 September 6, 2011 (AFP): The dusty wicket prepared for the first Australia-Sri Lanka Test in Galle was rated as poor by the match referee, the sport’s governing body said on Monday, ordering an inquiry.

The Test at the Galle International Stadium, won by Australia by 125 runs last week, saw 40 wickets fall in under four days, 16 of them on the second day.

The International Cricket Council (ICC) said it had ordered further investigation after match referee Chris Broad had expressed "his concerns over the quality of the pitch" in his report.

The duo will "consider all the evidence, including studying video footage of the match and submissions from the host Board, before reaching their decision in due course," the ICC said.

Sri Lanka Cricket has been provided a copy of Broad’s report and given 14 days to submit their explanation.

Rival captains Michael Clarke and Tillakaratne Dilshan had slammed the dry wicket after the match.

Clarke, celebrating his first win as Australian captain, said he had never played on a tougher pitch.

"Day one felt like day five out there," Clarke said after his team took the lead in the three-Test series, Australia’s first in Sri Lanka since 2004.

"I hate to see a Test match being determined by the toss. It was obviously prepared for their spin bowlers and that backfired. I guess I was just fortunate I won the toss."

Dilshan said he had not expected to play on such a dry surface.

"Usually, the wicket in Galle is good for both the seamers and the spinners, but I think it was too dry and made batting difficult," he said.

The second Test starts at the Pallekele International Stadium on Thursday.