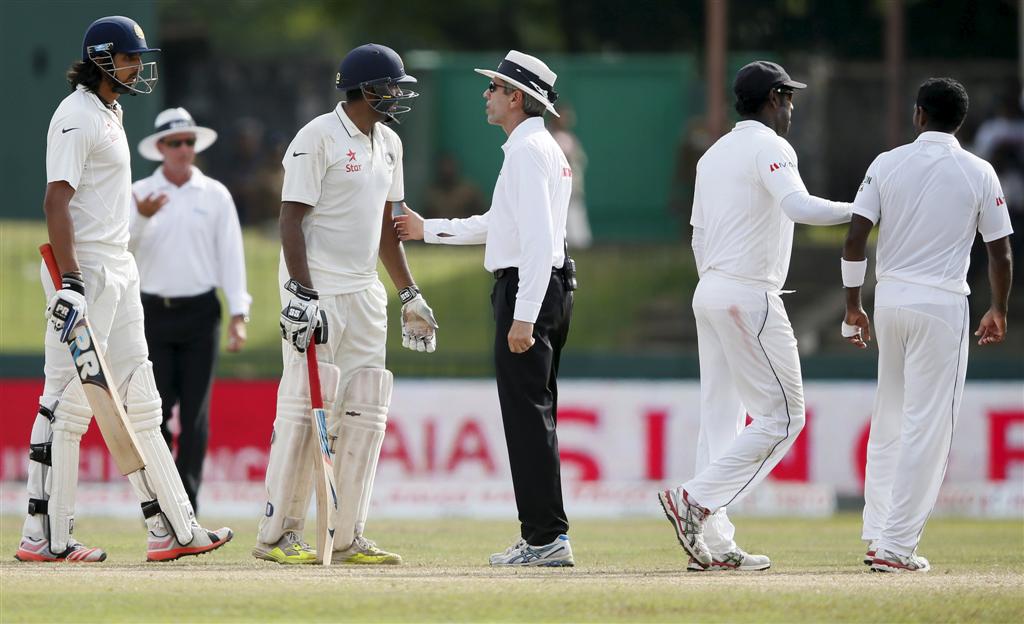 Ishant Sharma and Dhammika Prasad were involved in an ugly spat on day four, more on-field incidents were to follow on the final day. © Reuters

India paceman Ishant Sharma and Sri Lanka's Dinesh Chandimal have been given one-match bans after admitting charges of misconduct during the third Test between the countries, the International Cricket Council (ICC) said on Tuesday.

Two other Sri Lanka players, Lahiru Thirimanne and Dhammika Prasad, were fined half their match fees for their roles in the two separate incidents during the Test, which India won by 117 runs to secure the series win.

Sharma, who had been fined 65 percent of his match fees for giving send-offs to Thirimanne and Chandimal in the second Test, landed in trouble with the Sri Lankans in the final contest as well.

The ICC imposed two penalty points on the Indian fast bowler after he gave a send-off to opener Upul Tharanga in the first over of Sri Lanka's second innings — his third such offence during the heated series between the neighbours.

As a result, he will miss the first Test against South Africa in Mohali, which starts on Nov. 5, and the ICC warned that he faced a ban of up to one year if he repeated the offence within the next 12 months.

"These experienced cricketers forgot their fundamental responsibilities of respecting their opponents, as well as the umpires, and got involved in incidents which were clearly against the spirit of the game. Their actions cannot be condoned and must be discouraged."

Chandimal will miss Sri Lanka's next one-day international, against the West Indies on Nov. 1, for making "deliberate physical contact" with Sharma while he was involved in an altercation with Prasad.

Tempers flared on Tuesday when Ishant, after taking a single and running past Prasad, was seen smacking his own head as if daring the bowler to try to bounce him.

Chandimal joined from the slip, brushing shoulders with the Indian.

"Just before the contact between Chandimal and Sharma, Lahiru Thirimanne had twice ignored the umpires' warnings not to get involved in the incident," the ICC statement said.

Thirimanne and Prasad were each fined 50 percent of their match fees.

At the end of India's second innings, Ishant ran towards the Indian dressing room to change and get ready to bowl and Prasad was seen sprinting behind the Indian, as if trying to catch up with him.

Pycroft added: "Chandimal was not directly involved in the incident between Prasad and Sharma, but came into the conflict and made deliberate physical contact with Sharma and, had the umpires not intervened, the situation could have escalated.

"As regards Sharma, he had been put on notice after being charged twice for send-offs in the previous Test. Any repeat of this action within the next 12 months will potentially see him suspended for a much longer period."