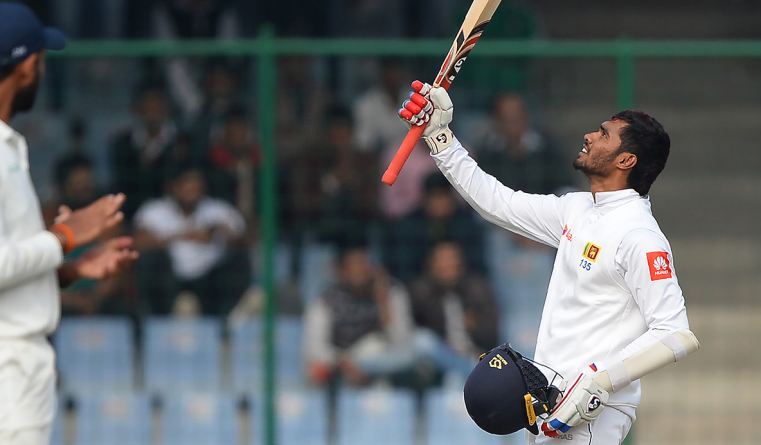 Sri Lanka captain Dinesh Chandimal said dropping his deputy Lahiru Thirimanne for the third and final Test against India was not an easy call but he was vindicated as Dhananjaya de Silva's gallant century secured a thrilling draw on Wednesday.

Number three batsman Thirimanne managed a 50 in his four innings in India but was dropped for the Delhi Test due to his tendency to play loose shots.

The tourists slotted de Silva in the crucial spot and the 26-year-old braved a thigh injury to score 119 and help his team eke out a draw at the Feroz Shah Kotla Stadium.

Once he retired hurt just before tea, debutant Roshen Silva, who followed his first innings duck with a fighting unbeaten 74, partnered Niroshan Dickwella and batted out the final session.

"The vice-captain not playing, it was tough on both him (Thirimanne) and the team," Chandimal told reporters.

"It's a tough call but Dhananjaya and Roshen Silva deserved their opportunities, especially Roshen who has scored more than 6,000 runs in domestic cricket."

"It's really unfortunate for Thirimanne but Dhananjaya and Roshen Silva grabbed their opportunities."

Despite the pain, de Silva was decisive in his footwork against the spinners, hitting 15 boundaries and a six in his free-scoring third Test century.

"It was a really good innings," Chandimal, who smashed a career-best 164 in the first innings, said of de Silva who also bowls off-breaks.

"We had full trust in him at number three. We knew he would give us some bowling option as well and he has grabbed the opportunity with both hands."

The smog-hit contest finally saw a mostly sunny day on Wednesday but the Test is more likely to be remembered for Delhi's toxic smog which had the tourists struggling.

Chandimal said the conditions meant his team found it difficult to perform to the best of their ability.

"It was a tough time for us as a team. We are not used to that. In Sri Lanka, you don't get this much pollution," the 28-year-old said.

"After the first two days, we discussed it with the team and said we need to forget that, and we need to play the game."