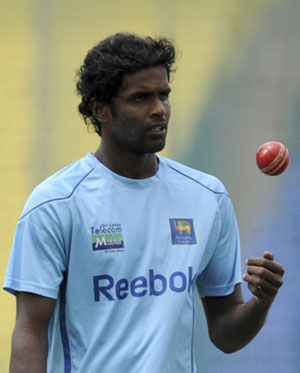 ‘We’re not too worried about today’s performance’ — Eranga
By Staff Writers | December 6, 2012

After scoring an unbeaten 172 on the opening day of the three-day tour match against Sri Lanka, CA Chairman’s XI opening batsman Scott Henry said that they hope to send the Sri Lankan team with their "tail between their legs" for the first Test next week against Australia.

With their bowlers labelled "toothless" by the Australian media and conceding almost 400 runs on the first day, Sri Lanka’s tour of Australia couldn’t have got off to a worse start.

"’Hopefully, we can send them to the Aussies with their tail between their legs — that will be great," the 23-year-old Henry said. He added that the wicket was good for batting.

The Australian newspaper The Age said that the visitors’ "toothless attack spent most of the day chasing balls to the boundary in the hot sun — with little reward."

"There will be very little to smile about for the tourists, with this match their only preparation for a three-Test series against Australia starting in Bellerive on Friday week," the paper added.

The only four wickets to fall were shared between Shaminda Eranga, Chanaka Welegedara, Suraj Randiv and Nuwan Pradeep.

Dhammika Prasad went wicketless in his 15-over spell, which cost Sri Lanka 101 runs.

Randiv too surpassed the century mark in his 23-over spell that yielded one wicket for 121 runs.

Eranga recorded figures of 1/22 from 15 overs and was the pick of Sri Lanka’s bowlers, but worryingly, he left the field due to a hand injury.

"The hand is not a big problem. It’s just a bruise. I have no problem bowling, but there is pain when I throw the ball when fielding," Eranga said.

"We’re not too worried about today’s performance. It’s a practise match and it was more important that every one got a good opportunity in the middle."