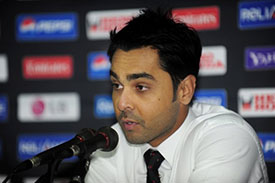 February 12, 2011 (Island Cricket): Canadian captain Ashish Bagai hopes to cause an upset at the ICC Cricket World Cup 2011 by defeating Sri Lanka in their opening match on February 20 in Hambantota.

Bagai said the clash against co-hosts Sri Lanka will be a tough one but felt the untested venue in Hambantota evened the playing field.

“We play Sri Lanka in Hambantota, which is a new venue. I think even they don’t know what to expect,” Bagai told reporters during a press conference at Dhaka’s Sheraton Hotel on Thursday.

Sri Lanka Cricket (SLC) failed to meet the International Cricket Council’s deadline for completion of their three World Cup venues, which has resulted in the home-side missing out on the invaluable opportunity to get accustomed to new venues in Hambantota and Pallekele and the renovated R. Premadasa stadium in Colombo.

“We would have loved to have gone there a month in advance, set our camps and maybe play a bit of provincial cricket there and some of the club games at those venues,” Kumar Sangakkara said last week ruing the missed opportunity, while speaking to reporters from Colombo.

“It would have been great for other players and the World Cup squad to experience those venues and match conditions, but things are what they are. So, we accepted the fact that we will have to go in and play World Cup matches on those grounds, without knowing the conditions too much,” the Sri Lankan captain conceded.

Sangakkara’s men were further deprived when their warm-up game against Netherlands in Pallekele was moved to Colombo as a result of heavy rains in the Kandy region. The home-team has been unable to train at any of the World Cup venues leading up to the tournament.

The Indian-born Canadian captain, however, conceded that minnows Canada will have their work cut out.

“But it’s going to be tough. We get there [Hambantota] days before. Hopefully, we will get used to the conditions. The team is prepared to play them mentally.

“Lasith [Malinga] and [Muttiah] Muralitharan are obviously the main threats to our batting. But I still think we have a good chance,” Bagai added.

Meanwhile, legendary off-spinner Muttiah Muralitharan, who will be playing in his final World Cup, told reporters in Colombo this week that he, was wary of the lesser known teams in the competition.

“Australia, New Zealand and Pakistan, we know these teams. [We know] who the players are and their form. But we don’t know about Kenya, Canada and Zimbabwe and they can cause a surprise,” Muralitharan said.

“We can’t call these smaller teams ‘minnows’ anymore because they have surprised stronger teams in the past.”