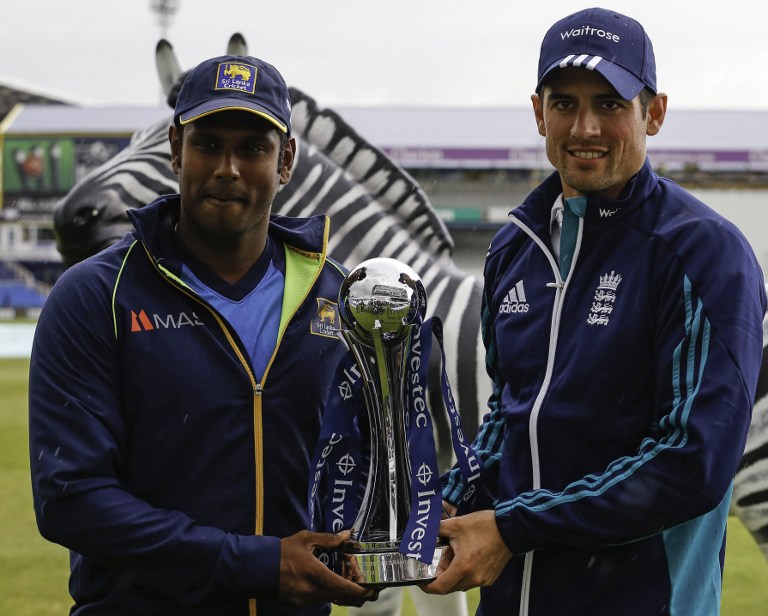 Alastair Cook and Angelo Mathews pose with the Test series trophy at Headingley in Leeds on May 18, 2016, ahead of the first Test. © AFP PHOTO

Perhaps more than anywhere else in the world, the performance of your openers matters when in England. Exposing your middle order in conditions where the ball moves a lot in the first 10 overs is best avoided. Dimuth Karunaratne and Kaushal Silva performed this role admirably, the last time Sri Lanka was in England. In fact, one of the forgotten and undervalued contributions on that tour was how these two kept at bay the English bowlers from getting a crack at Kumar Sangakkara, Mahela Jayawardene and Angelo Mathews in the first 10 overs. They were slow, and didn't put together record-breaking partnerships numbers, but they did their job.

Two years on, their performance will arguably again be the single-biggest factor when it comes to how Sri Lanka's top order is likely to perform.

In 2014, they had a safety net the size of Sangakkara and Jayawardene. This time though they have a young, able but untested top and middle order, with not many Tests between them. With the England bowlers having signalled their intention of dealing out some sweet revenge this time around, Karunaratne and Silva will be the first targets. The key won't be runs or how quickly they score, it will be blunting that new ball and batting for as long as possible.

The fact that Lahiru Thirimanne was even picked for this tour raised a few eyebrows. For a batsman who has scored two half centuries in 35 innings over the last two years, and with the precision shown in dissecting his technique by James Anderson in 2014, he should count himself very lucky to be in England. He has the support of ex-players, ex-selectors, current selectors and a litany of fans who still believe in him. It is hard to foresee Thirimanne overcoming his dearth of runs, lack of confidence and facing up to Anderson and Stuart Broad again and coming out on top

Kusal Mendis has impressed. He appears to have developed the skills that make a good number-three. Mendis plays mostly on instinct and has the ability to bat at his own pace within the context of the game — a rare skill. At 21, with only three Test matches to his name, the responsibility he bears is a big one. It's a challenge that could make him or break him, but there is a quiet sense of optimism about his batting.

Mathews has worn the heavy weight of expectations placed on him well so far. His batting entered another realm a few years ago with the responsibility of captaincy. And without his runs, the 2014 win would have never been a reality. While his runs are going to be key again, it will be how he guides his young batting line up that will matter more. He has batsmen who are out of form and those still in their training wheels, and a few of his own demons to manage, as he looks to get Sri Lanka over the line. There is no fall-back position for him on this tour without Sangakkara and Jayawardene. The pressure on him is immense. His experience in these conditions is what will be drawn on by the youngsters. In short, Mathews has a lot on his plate. The worrying factor is that it might affect his runs. It's a vicious cycle.

Dinesh Chandimal appeared to have turned a corner when he flayed India at Galle in 2015, in what was easily the best innings of his career, and then normal service resumed. Chandimal is a player stuck on trying to figure out what kind of batsman he wants to be. Initially, he was a carefree attacking batsman. Then, perhaps with the ascendancy to captaincy and having become a 'senior player', his approach changed. A war rages on within him — between the batsman Chandimal naturally is and the batsman he thinks he needs to be. The former is when he's been at his best. An iteration of that self in England is going to be important for Sri Lanka.

Niroshan Dickwella might get picked solely to take the gloves off Chandimal. He is yet another player with a lot to prove. Dickwella's runs against Essex stand him in good stead but he's not yet spoken of in the same level as Mendis. This tour is as bigger an opportunity as he will get to change that.

The lower-middle order batting is an area of the Test batting line up that Sri Lanka has given up on over the last decade. And then Kusal Perera debuted and Milinda Siriwardana showed up. Perera was not included in this squad as a result of the whole drug fiasco and Siriwardana will struggle to buy a run at the moment. It is certainly an area of concern, given that the top order is inexperienced and brittle. Both Siriwardana and Perera offered a counter-attacking philosophy down the order, which was a breath of fresh air for Sri Lanka.

The most recent disciple of this path is Dasun Shanaka, another rookie who has given the selectors a bit to munch on with his hundred against Leicester. Whoever gets the nod for the number-six position, it is hard to underscore how important a role this spot will play during the series. The batsman occupying this position will need to have a series where he averages upwards of 40, and also play a key role along with Mathews when batting with the tail. This could potentially be the pivot in the line-up where Sri Lanka loses matches from.

Dhammika Prasad, Shaminda Eranga, Nuwan Pradeep, Rangana Herath, Dushmantha Chameera, Suranga Lakmal. 200 overs for nine wickets for 787 runs in their two tour matches in England. Those are the returns of an attack chief selector Sanath Jayasuriya has dubbed one of the best attacks in the world.

Whatever happens with the batting, if the bowlers do not perform Sri Lanka will have a difficult month in England. The experienced Prasad was, once again, going to be the key. He is a bowler who was up-trending in his career, a bowler who has the experience in getting wickets in England, and a player who has bulldozed his way into being the leader of the pace attack. His injury and unavailability for the first Test is Sri Lanka's equivalent of Glenn McGrath missing the 2005 Ashes Test at Lord's. It is that bigger a deal. Without Prasad leading the way, Eranga and Pradeep will have to dial up their performance level. Thus far both these bowlers have played the supporting role during Prasad's recent rise. Whether they can deliver on their own from the front line remains to be seen.

Chameera is quite easily the most exciting Sri Lankan fast bowling prospect. The 24-year-old bowls over 145 kph and also has a good change of pace, highlighting intelligence. He thinks about how he will setup batsmen for his quick bouncer. Whether England's batsmen find his pace unsettling, as most batsmen in international cricket have, is going to be an important factor. How Mathews uses Chameera will also be key. He has opted to use the youngster in shortish spells, and this should suit him.

Sri Lanka have more problems though — the pacemen's use of the old ball. None of the quick bowlers have mastered reverse swing. The ability to break partnerships late in the day, or when the opposition has bedded down, is going to be a struggle for this team. Sri Lanka will focus on getting wickets early with the new ball for Rangana Herath to spin the lower order out with the old one.

Paul Farbrace and Trevor Bayliss have infused a sense of modernism to their cricket. They have experience where it counts, in the top order and in their bowling. They are the hosts, the more settled side and are looking to kick off their summer on a high. England are also hurting from the 2014 loss and want to put it right. Broad has often been talking about serving up a plate of good old fashioned revenge.

Neither Alastair Cook nor Mathews are inspiring as captains. Cook though has experienced players he can rely on in a fight. Joe Root, Anderson and Broad have been through many difficulties in their careers over the last five years, and the core group that Cook will depend on. He can afford to captain on auto pilot.

For Mathews, the task difficulty has increased tenfold since 2014. The team is low on confidence. He does not have the experience of Jayawardene or Sangakkara to help out when in a rut. His team lacks the know-how where it matters in the middle order and his bowlers are not in good form. Much of how Sri Lanka fares in the Test series will depend on how much of a maverick Mathews will attempt to be. His use of Herath and the pace of Chameera, and how he guides an inexperienced and untested batting line up, will determine a lot. In a team like Sri Lanka, in the current incarnation that they are in, captaincy can go a long way. It remains to be seen whether Mathews can evolve himself to meet this challenge

It would not be a surprise if this series ends up being a whitewash in England's favour. The hosts are more settled, more experienced and better-prepared for the battle. For Sri Lanka, the best hope is that they don't lose in an utterly embarrassing manner. The odds are against Sri Lanka. With weather possibly being a factor in early May, they may get away with a draw at some stage.

In the end, it is truly up to this scattering of talented individuals to pull together as a team to prove that they are moving forward and not fading into the giant shadows cast upon by their predecessors.