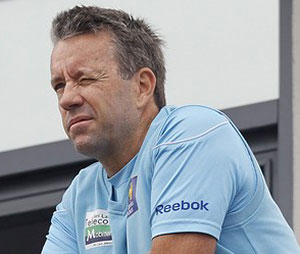 After amassing 351/5 in their 50 overs, Sri Lanka’s bowlers allowed the Worcestershire Royals’ batsmen to near the 300-run mark. The Royals were eventually bowled out for 294 in the 44th over, but not before Moeen Ali (136 from 90 balls) launched a vicious attack on the visitors’ bowlers.

Had it not been for a middle-order collapse, which saw The Royals’ last six wickets fall for 24 runs, the home team were on their way to a famous victory.

“If we bowl like that against England, we are going to be in a lot of trouble, Law said, speaking to reporters after the match.

“In the end it’s a win, but we have got plenty of areas to improve in.”

Sanath Jayasuriya (2-17) and Lasith Malinga (3-25) managed to take wickets and bowl economical, but the rest had economy rates surpassing 6.5 runs per over.

While Jeevan Mendis’ three overs cost 28 runs, Thisara Perera and Nuwan Kulasekara, who Sri Lanka rely on in their full-strength limited overs side, were expensive.

Perera bowled just six overs and gave away 51 runs, and Kulasekara, despite taking a wicket, leaked 53 runs in his eight overs. In the same fashion, Ajantha Mendis’ three wickets cost 7.55 runs per over.

Sri Lanka and England will meet for the only T20 of the tour on June 25 at Bristol, which will be followed by five ODIs starting June 28.