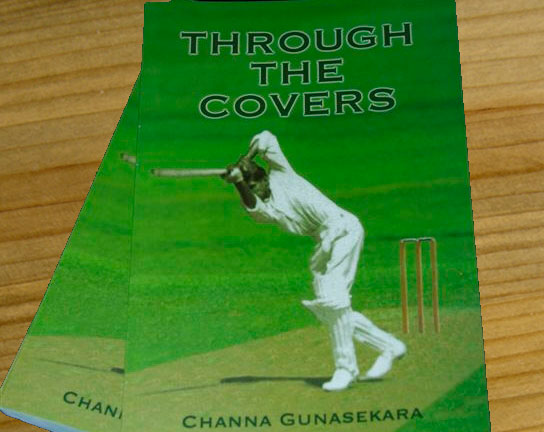 Siblings of famous parents have a formidable cross to bear. Some wilt, as did John, son of the legendary Sir Donald Bradman, who temporarily changed his surname as well to avoid the inevitable comparison. However not Channa. In his own words, he deemed it “a privilege as well as a challenge” to be born the son of Dr.C.H.Gunasekera – the father of Ceylon cricket.

“Dr.C.H.” was a medical doctor, author, playwright, pianist, historian, all-round sportsman and a keen student of Buddhism, all rolled into one. Didn’t Sir Pelham Warner, former captain of the champion county Middlesex in 1921 & 1922, under whom Dr.C.H. played commented: “In a long life, one of the things I am least likely to forget is Gunasekera’s beautiful fielding. He was a good companion and I am glad that I had the opportunity of playing with him.” The doyen of English cricket writers, E.W.Swanton, compared Dr.C.H.’s fielding in the covers to that of the West Indian legend Learie Constantine. Certainly defies anyone to be compared with such a luminary. This was the challenge that young Channa faced when climbing the ladder of life.

What is more, Dr.C.H. was the first Ceylonese to have played English county cricket, and up-to-date the only local player to have been a member of a champion county side. In fact, Channa proudly showed me the gold medal his father was awarded on this occasion. The son obviously did not reach the lofty heights attained by his versatile and illustrious father who excelled in many a different field but, in the field of cricket, the ‘Old Man’ must be having a contented smile from atop the Elysian fields in approval of his son’s feats, including his achievements in athletics, lawn tennis and a not too successful effort at rugby football. After all, didn’t his son, though not a great academician, become head prefect and follow his father’s footsteps by captaining Royal College first XI cricket team, and later opened batting for club and country, and more importantly contributed handsomely to the cricketing reputation of the network of the Gunasekeras?

Didn’t Jack Fingleton, famed Australian opening batsman, a highly respected journalist, after having watched Channa’s unbeaten innings of 66 runs for Ceylon against the Australian attack comprising Miller, Johnstone, Archer and Benaud, at the Colombo Oval enthused: “While on tour in England I never came across a better opening batsman than Gunasekera who was top class.”

Through the Covers is a meticulously compiled autobiography of Channa, completed more or less just before his demise. This is his second effort in compiling a book, the first being ‘The Willow Quartette” where the feats of four of the greatest cricketers produced in this country M.Sathasivam, F.C.de Saram, C.I.Gunasekera and S.S.Jayawickrema were chronicled, for the first time, for posterity.

Through the Covers covers in great detail, in fact, bordering on the excessive, of Channa’s career from his school days. His penchant for detail, however insignificant it maybe for the casual reader, is a reflection of his inherent character; always a stickler for detail. Or as a wag commented in lighter vein: “All these cricketing Gunasekeras do have something peculiar about them.”

Of one thing you can be certain, having read the book, one can be certain that what is found inside the covers of this book can be accepted as gospel. Such was his attention to facts. In those days, opportunities of playing against international players were few and far between. As Channa admits rather ruefully: “We were grounded at home, twiddling our thumbs, our talents kept hidden and carefully wrapped in cold storage, with no avenues for expression.”

However, the book takes the reader through many games, incidents, anecdotes and characters, and how the game was played in Ceylon. In those times, beginning in the decade of the 1940’s, when cricket was a sport, and not an industry, also gives the reader an insight into the social fabric of those times. For instance, read about the occasion when Channa as captain of Royal College, during the ‘Big-match’ recalled Thomian batsman Chellaraj who had been adjudged ‘run-out’ – unfairly thought Channa – to the crease.

“The first and only time I believe such a thing had happened in this historic series, or in any other important game of cricket in Ceylon” writes Channa.

Another interesting anecdote relates to an incident in athletics when the late Lakshman Kadirgamer broke Channa’s 120 yards hurdles record – with a questionable start – set barely 24 hours earlier by “very nearly 0.7 seconds”. Channa also has the ability to laugh at himself when he finally “did a high jump” to complete the grueling 400 metres hurdles event and “finished a valiant second”. I leave it to the readers to read and find out how many competitors participated in this event.

The readers would be taken around the entire fabric of cricket at the top in Ceylon, including overseas tours – Gopalan Trophy games in Madras – and the visits by international teams from England, Australia and the Commonwealth XI’s.

Channa gives us a ring-side view of all the big names in the local and international cricket scene with immaculate details of course – after all he had played with or against them – in his inimitable style. True, he had a few hiccups with his club the S.S.C., but that is to be expected since Channa always stuck stubbornly to what he thought was correct and was not averse to express his point of view. For instance, how he reacted when a Cricket Board official tried to influence him, as the adjudicator, to nominate the Man of the Match to someone of his choice.

Through the Covers is basically meant to be an autobiography of a gentleman cricketer who played at the top level with the best in the land at that time. However that did not preclude him from enjoying other delights in life on offer. Snippets of this aspect of Channa’s life are strewn adding spice to the reader. Less said about his attempt to enter the stage – with encouragement from the incomparable Lucien de Zoysa – when, as a result of having given the wrong cue, “ferocious war drums started beating with blaring trumpets during a tender love scene!”

Music was in his blood, and ballroom dancing was another field he was contemplating to enter on a competitive basis but decided otherwise since it interfered with his daily cricket practices. In later life, he found much solace in listening to classical music and in his indulgence in playing bridge with a select band of friends.

Though not mentioned in the book, I would be failing in my duty if I did not pay tribute to his wife Shanti, and son Chanaka. During the evening of Channa’s life when the spectre of illness began to take its toll, Shanti, with support from his son Chanaka, gave him tender care until the last. It must have been a trying time but Shanti was equal to the task whisking him to the hospital for treatment at every turn and attending to all of Channa’s needs with loving attention.

Reading Through the Covers one gets a clear picture of a man who had cricket literally and metaphorically flowing in his blood, of a man who had a deep and an abiding love for the game and maintained cricketing principles both and off the field, sometimes even to a fault. If only, a hackneyed phrase in cricket, Channa was born a few decades later he would certainly have adorned our Test team without a doubt.

Through the Covers can be purchased from Vijitha Yapa Publications at www.vijithayapa.com or from Chanaka Gunasekara (e-mail: chanaka_gunasekara@yahoo.com.au / Mob: +61 410 640 445).