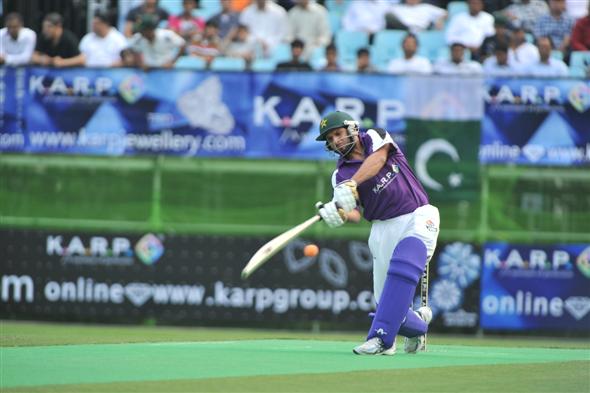 Sri Lanka, winners in 2007, began their hunt for a second Sixes title with a convincing 30 run victory over Scotland.

Shahid Afridi in action at the T20 match on day one of the Karp Group Hong Kong Sixes 2011.

October 28, 2011 (Island Cricket): A stunning century from Lou Vincent helped the Woodworm All Stars begin their campaign at the Karp Group Hong Kong Sixes on a winning note when they defeated a Rest of the World team in the first ever international Twenty20 game in Hong Kong.

Vincent smashed a 29-ball century as the Woodworm All Stars – who did not have a game in the Sixes competition on the opening day – overhauled a massive total of 368 set by the Rest of the World with two balls to spare.

“I was practising what I have been preaching to the Hong Kong guys these past two weeks. It was nice to see my batting philosophy come right today,” said New Zealand’s Vincent who has recently been appointed as Hong Kong batting coach.

Vincent hammered 11 sixes and 13 fours as he outshone illustrious team mates Sanath Jayasuriya of Sri Lanka and Pakistan’s Shahid Afridi in a run-chase at the Kowloon Cricket Club grounds.

Afridi and Jayasuriya might hold the records for the most number of one-day international sixes, but Vincent showed he too can plunder the runs as he caned a bowling attack which included compatriot Abdul Razzaq, South African Dillon Du Preez and up-and-coming young leg-spinner from Australia Adam Zampa.

The small grounds is tailor made for batting and Rest of the World, taking first lease of the wicket, went on a run-spree with England’s Darren Stevens leading the way with an accomplished 105. Half-centuries from India’s Dinesh Karthik (52) and Scot Calum Macleod (60 not out) plus quick-fire knocks of 44 and 41 from Pakistan duo Razzaq and Umar Akmal paved the way for a massive total of 368.

But the All Stars made light of it. Jayasuriya and Afridi set the foundation with a second-wicket partnership of 99 after Herschelle Gibbs had been dismissed early. Jayasuriya was quickly into stride with his trademark flicks over square leg, and hit 10 sixes and five fours in his knock, which was cut short when he skied Zampa to Peter Trego in the deep.

Afridi then took over and with Ryan ten Doeschate of the Netherlands, added 85 for the third wicket. Afridi was out for 63 with the score on 209. His departure was the signal for the ‘Lou Vincent show’ and the Kiwi plundered the runs with ease and steered the All Stars to a two-wicket win.

The victory will put the All Stars in the right frame of mind as they begin their Sixes campaign today with pool games against Sri Lanka, Scotland and New Zealand.

Sri Lanka, winners in 2007, began their hunt for a second Sixes title with a convincing 30 run victory over Scotland. Skipper Chamara Kapugedera led the way with an unbeaten 34 as Sri Lanka made 83 and then restricted their opponents to 53 to start on a sound note.

Crowd favourites India had to endure a few anxious moments against hosts Hong Kong who notched an impressive 117 off five overs. But an indisciplined bowling performance from the home team allowed India to sneak to a last ball victory.

We thought it would be tough for us. Everybody is playing for the first time in the tournament, but we went out with a positive frame of mind, and just thought we will go out there and enjoy. I’m happy with the outcome,” said delighted Indian captain Dinesh Karthik who top-scored with 34.

Ireland had mixed fortunes, defeating Bangladesh but then losing to Australia in their second pool game. Fellow-associate members Scotland bounced back from the loss to Sri Lanka to defeat New Zealand by six wickets, successfully chasing down a total of 88.