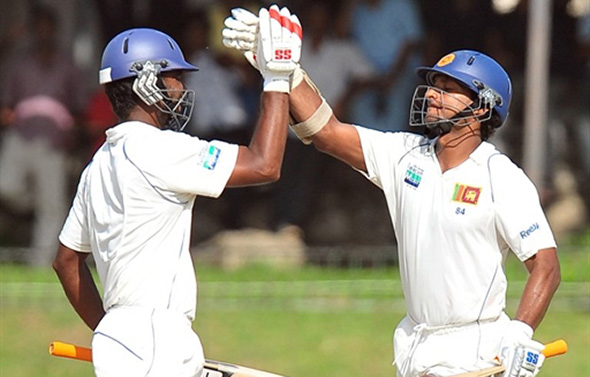 Kumar Sangakkara (R) is congratulated by his teammate Tharanga Paranavitana (L) after he scored a century (100 runs) during the first day of the second Test match between Sri Lanka and India at The Sinhalese Sports Club Ground in Colombo on July 26, 2010, AFP PHOTO/ Lakruwan WANNIARACHCHI.

July 26, 2010 (islandcricket.lk): It’s the same old story over and over again. Win the toss at SSC, pile up the runs and put pressure on the opposition. With a 1-0 lead in the three match series, Sri Lanka after winning the toss were well placed on 312 for two at stumps here at the Sinhalese Sports Club ground yesterday.

Both Tharanga Paranavithana and Kumar Sangakkara continued from where they left in Galle scoring successive hundreds before Paranavithana was dismissed soon after his century after a 174 run stand for the second wicket, but Kumar Sangakkara was unbeaten on 130 to remind the Indians that the misery is far from over. Giving him company was Mahela Jayawardene unbeaten on 13 as the pair added 39 runs for the third wicket.

A few years ago, when Sangakkara and Jayawardene were unbeaten overnight on day one at SSC, they went onto pile up a record 624 runs for the third wicket against South Africa.

Earlier in the morning, when Tillekeratne Dilshan was in middle, Sri Lanka were in T-20 mode as their 50 came in the tenth over, the third successive half-century partnership by the opening pair. Dilshan went onto reach his half-century in just 39 balls with ten fours.

He looked in supreme touch before being dismissed against the run of play when he stepped out to left arm spinner Pragyan Ojha attempting to loft the bowler over extra cover, but hit it straight to V.V.S. Laxman at short extra cover, who took a good catch as Sri Lanka’s first wicket fell with the total on 99.

Paranavithana took 112 balls for his half-century while Sangakkara required 82 balls.

The 100 run partnership for the second wicket and the team’s 200 came when Paranavithana whacked Harbhajan Singh, who is yet to take a wicket in the series, for a six over mid-wicket.

Paranavithana reached three figures after tea when he drove Virender Sehwag pass mid-off. In the same over Sangakkara joined him, his third successive hundred actually, when he came down and hit over mid-on for four.

Then Paranavithana was out to Ishant Sharma, who had bowled poorly all day when the batsman chopped one onto the stumps.

India took the new ball in the 86th over, but couldn’t make further inroads although Sangakkara survived some nervous moments when the fast bowlers found a few edges, but no harm was done.

Jayawardene faced 56 balls for his 13 and his score would have been a single digit one if not for the four off the last ball of the day, but having missed out in Galle, he appears to be hungry for something big at his favourite venue.

Sri Lanka have not lost a Test Match at SSC since losing to Australia in March 2004. Of the nine Tests played since, they have won six while three have been drawn. India, meanwhile, have suffered innings defeats in their last two visits here and they will be trying hard to prevent another catastrophe.

Sri Lanka did four changes to the side that won the first Test in Galle by ten wickets with all four bowlers who played in Galle being replaced. While Ajantha Mendis replaced retired off-spinner Muttiah Muralitharan, Suraj Randiv made his debut replacing Rangana Herath, a rather surprising decision given the fact that Herath hadn’t done anything wrong in Galle. Dilhara Fernando came in for Lasith Malinga while Chanaka Welagedara was dropped in favour of Dhammika Prasad.

The Indians meanwhile also made two changes after opener Gautam Gambhir was ruled out with a knee injury while Yuvraj Singh was ruled out due to high fever. Gambhir was replaced by Murali Vijay while Suresh Raina made his Test debut coming in for Yuvraj.