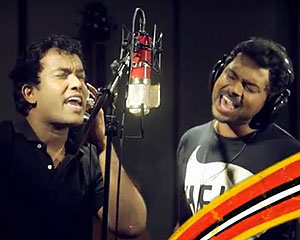 Bathiya and Santhush invite cricket fans to be a part of the music video.

The official song of the WT20 captures the spirit and energy of Sri Lanka and the Twenty20 format of the game with a burst of Sri Lankan percussions and the Island’s unique celebratory ‘papare’ music.

Bathiya & Santhush are one of the biggest names in the Sri Lankan music industry. The duo, together with the ICC, will launch a unique campaign to involve all cricket fans in the making of the music video for Vissai Vissa.

Sri Lankan fans are invited by Bathiya & Santhush to join the music video by filming themselves singing the official song. Videos can be shot using mobile phone cameras or handy cams and uploaded online to a website which will be announced later. Fans can sing the event song solo or with family and friends and are encouraged to be as creative as possible. Their videos will be featured along with Bathiya, Santhush and cricket stars singing the World Twenty20 anthem.

“We wanted to involve the fans in the video of the ICC World Twenty20 song, as they are a huge part of the country’s spirited cricket culture,” Bathiya & Santhush said, in a statement released by the ICC.

“Fans have built the celebratory atmosphere that surrounds a game of cricket. The upcoming ICC World Twenty20 will be an explosion of excitement and fun and this is a special tribute to all the fans of the game.”

Special booths with fun backdrops and props will be set up in key locations and towns for fans to record their videos and upload the clips. Fans will be able upload clips of their own creative video versions by clicking on the option “Create a video response” below the official song.

The fan responses will later be screened by the ICC and uploaded to the official ICC YouTube channel (www.youtube/user/cricketicc) to generate the most number of “thumbs up” in the contest. Selected contestants will then be entitled to have their personal ‘cheer’ as part of the official music video.

The English version of the song is sung by Arjun Coomaraswamy for international audiences, while the Tamil version is performed by Dinesh Kanagaratnam. All versions of the song can be downloaded via the ICC’s website at the following link: http://www.icc-cricket.com/media_interactive_zone/audio_interview.php

The official Video of the World Twenty20 anthem will be released in Sri Lanka and globally on September 7.