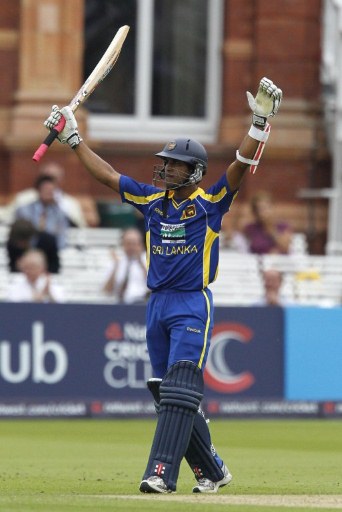 July 4, 2011 (Island Cricket): A full house at The Home of Cricket had a glimpse of the future of Sri Lankan cricket, as 21-year-old Dinesh Chandimal scored a superb hundred to help the tourists to a six wicket victory, to take a 2-1 lead in the five match ODI series against England here at Lord’s yesterday.

For those who have followed Sri Lankan cricket in close quarters, it’s a known fact that there’s no shot that the youngster from Balapitiya cannot play and he showcased what he’s capable of doing, as he finished with an unbeaten 105 off 126 balls with 11 fours and two sixes.

The treats former great Aravinda de Silva has given Sri Lankan spectators over the years are plenty, but a Lord’s hundred for the country always eluded him. Yesterday, young Chandimal went onto show that he has the ability to match the great man when he put England’s Ashes winning bowling attack to the sword.

As the protests grew, Chandimal reached his second ODI century in Aravinda de Silva style by depositing Tim Bresnan for a six over long-on.

In the next over, he finished things off with a boundary to help Sri Lanka win with ten balls to spare.

Chandimal, who hails from Balapitiya, was educated at Dharmasoka College, Ambalangoda before shifting to Ananda College, Colombo. He was playing in just his sixth ODI yesterday, but batted like a man with tons of experience.

Apparently, he was overlooked for Sri Lanka’s World Cup 2011 squad, as selectors suspected that he was vulnerable against the short ball. England thought in similar lines and started bouncing at him, but they were only engaged in a futile exercise.

He was involved in a 112-run stand for the second wicket with Mahela Jayawardene, who made 79 off 77 deliveries with nine fours.

It was England who won the toss and elected to bat first and their captain Alastair Cook fought a lone battle scoring his second ODI century.

After Lasith Malinga had Craig Kieswetter caught at mid-on with a slower ball, with the total on 18, Sri Lanka could have dismissed Cook in the next over, but Jayawardene at first slip put down a straight forward chance off the bowling of Nuwan Kulasekara, with the batsman on 15.

England had crawled to 32 runs in 11 overs amidst some tight bowling and Kevin Pietersen broke the shackles, when he hit three successive fours off a Suranga Lakmal over.

It was left-arm-spin that had troubled Pietersen during the early part of the summer. But once the One-Day Internationals began, the leg-spinners seem to have had the upper hand over him. Jeevan Mendis has now dismissed him in three consecutive occasions in the series, after the star batsman top edged a googly to be caught by Suraj Randiv in the deep.

England were in trouble when they lost Eoin Morgan in the next over, with the total on 85 for four. But Cook fought back to ensure that his bowlers had a decent total to defend.

There had been some criticism on Cook’s appointment as England ODI captain – he was not even a part of England World Cup squad a few months ago.

The British media, including former captain Michael Atherton have questioned whether he deserved his place in the ODI side, but his 119 off 143 deliveries seems to have settled the issue for the time being.

England opted for the Batting Power Play in the 35th over of the innings, but only managed 24 runs scoring just one boundary during the five over period.

Cook was dropped on 103 by Thilina Kandmaby, but was dismissed in the last over of the innings when he was run out.