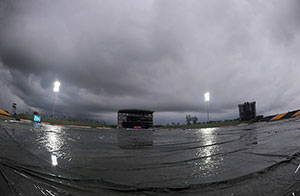 The first ODI between Sri Lanka and New Zealand in Hambantota was called off due to rain on Sunday.

After Sri Lanka were put into bat, the hosts reached a competitive 288/9 in their 50 overs, with Tillakaratne Dilshan (81), Kumar Sangakkara (79) and skipper Angelo Mathews (74) all scoring half-centuries.

New Zealand got off to a wobbly start after Lasith Malinga rattled Anton Devcich’s stumps in the final ball off New Zealand’s very first over.

It wasn’t much long after Devcich’s dismissal that a steady drizzle turned into heavy rain, forcing the players off the field.

The visitors were 13/1 after 4.2 overs when the match was abandoned.

The second ODI will take place at the same venue on Tuesday.

New Zealand are in Sri Lanka to play three ODIs and two T20s from November 10 to 21.

According to Sri Lanka’s department of meteorology, the island’s second inter-monsoon season is in the months of October and November.