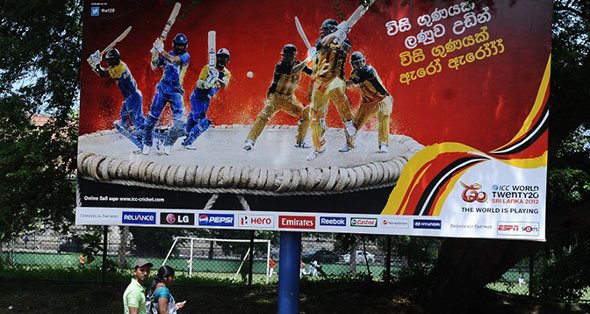 The most open WT20 tournament is upon us
By Goutham Chakravarthi | September 17, 2012

Colombo — Nearly four years have passed since I last visited this glittering island. The lack of multiple security checks at military checkpoints, a facet that seemed a norm back then, immediately stands out. One thing that hasn’t change is the warmth of the locals and the smiles on their faces.

From the airport to the beachside restaurants in the south of Sri Lanka, it’s all about the ICC World Twenty20. Seaside resorts are abuzz with cricket fever, and even the cab drivers tell me they are keeping an eye on the weather forecast, praying for the rain gods to show mercy for a month.

"I want West Indies to win and I believe they have a good chance," Abhishek Bharathkumar, an Indian national and a former age-group captain for Tamil Nadu, who is here in Sri Lanka on vacation with his family, said.

In addition to home favourites Sri Lanka, India and West Indies are also seen as favourites by the locals to win the trophy while Kumar Sangakkara, Chris Gayle, Virat Kohli, Shahid Afridi and Lasith Malinga appear to be the fans’ picks for the stars of the tournament.

Sangakkara is extremely popular amongst the locals here, understandably so.

“Kohli is my favourite player from outside of Sri Lanka. But Sangakkara is my favourite though and his three awards only prove that he is among the best in the world,” says Haroon, a shopkeeper at the airport.

Teams, stats, clubs, T20 leagues are all part of routine conversations with cab drivers and at family dinners.

The locals are also excited by the unearthing of unconventional talents Dilshan Munaweera and Akila Dananjaya, and the expectations for them to deliver are high. Sri Lankans are extremely confident the two players discovered at the SLPL have what it takes to succeed; many of them want both players to be included in the playing XI instead of warming the benches at this year’s T20 World Cup. With Sri Lanka known to offer unorthodox talent, the world will wait with equal interest to see if Dananjaya and Munaweera can use this platform to launch their careers similar to how Angelo Mathews did during the 2009 edition of the tournament in England.

The wickets here seem to be no longer inclined to help slow bowlers or batsmen who thrive on slow, low tracks. Well rounded attacks like Pakistan’s are expected to succeed and progress beyond the Super Eight stages.

“Wickets these days offer some nip to even medium pacers. I think Thisara Perera will be the player of the tournament if we go on to win the cup,” says Cathy, who is a waitress at the wonderful beachside restaurant Loon Tao in Mount Lavinia. She believes teams with allrounders who can bowl medium pace are at an advantage.

A large contingent of tourists meanwhile are keen on catching the action at the India-Pakistan warm-up game on Monday. However, the overselling of World Cup tickets still lingers as a prime concern amongst many of them.

"Ticketmaster, who are handling the ticket sales for the ICC, found that in the first few days of sales certain ticket outlets had access to the ‘blocked’ ticket database, and some of those tickets were sold to the public," cheif executive of the Sri Lankan cricket board Ajit Jayasekara said, explaining the issue to Island Cricket recently.

"When this computer glitch was noticed, they took remedial steps and offered alternative seating to those few people who had bought tickets from that database. The actual number is minimal and did not have an effect on the overall ticket sales."

Even with several warm-up matches out of the way, It is hard to pick a favourite to win the tournament. The wickets will certainly have a significant say in outcome of the series, and should the wickets have nip and pace, it will be a very open tournament. Three sub-continental teams made it to the semi-finals of the ODI World Cup played in the sub-continent last year, and it is hard to see others challenge them should the wickets turn out to be slow turners.

Pakistan possess an impressive bowling attack, however, the chasm between sides shrinks to a blur in this format. Teams like Bangladesh can pose a formidable threat; both Pakistan and New Zealand will be wary of them, as they are in the same group.

The mood is festive. The most open WT20 tournament is upon us. Sri Lanka is the place to be right now.