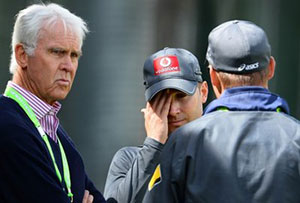 Australian captain Michael Clarke has twisted his ankle during a practise session, and is expected to miss the final ODI of the five-match series against Sri Lanka.

Clarke’s condition will be looked at again on the afternoon of the fifth ODI, but reports say the Australian skipper is unlikely to recover in time, which would force T20 skipper George Bailey to stand in.

Bailey told reporters that Clarke had been sent for scans.

"He will be given right up until the toss tomorrow to prove that he’s right to go," Bailey said.

"Hopefully, that scan is clear. There will obviously be a little bit of pain, but if he’s 100 per cent he’ll play."

Sri Lanka lead the series 2-1, with one match abandoned due to a wet outfield at the SCG earlier this week.

If Sri Lanka win the series, it will be the first time a visiting team has recorded two ODI series victories, in bilateral series, in Australia.

The final ODI gets underway in Hobart on January 23.