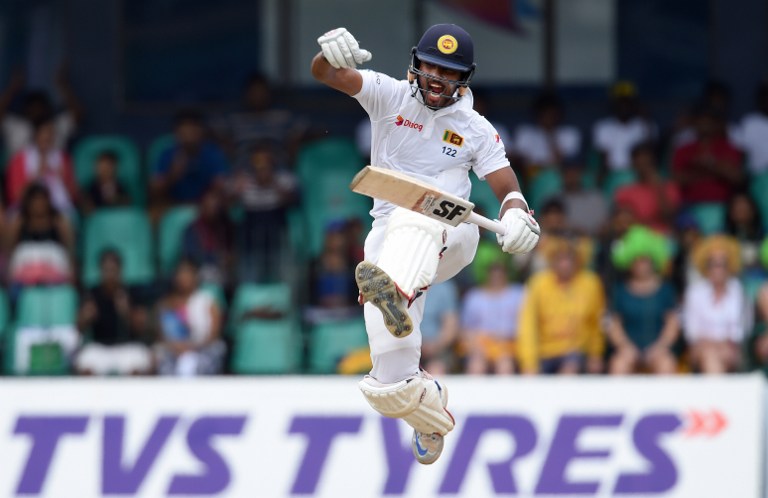 Despite a century to Sri Lanka's vice-captain Dinesh Chandimal, Australia were able to bat with an air of assured authority to make their way through more than a third of Sri Lanka's total of 355 in the final session of play, finishing at 141/1 and trailing Sri Lanka by 214 runs at stumps on day two of the third and final Test match in Colombo.

Australian captain Steve Smith was unbeaten on 61, while opener Shaun Marsh was not out on 64.

Earlier in the day, Dhananjaya de Silva and Chandimal stretched their overnight partnership to 211 before de Silva was caught by Marsh, off the bowling of Nathan Lyon, for a magnificent 129. Chandimal took that as his cue to take the reigns, as he began to attack the spinners.

Dilruwan Perera also took the aerial route in his innings of 16 from 32 balls inclusive of three boundaries, one of which he got off the mark from, advancing down the track and smashing Lyon back over his head.

When Perera fell to John Holland, Chandimal and veteran spinner Rangana Herath added another record to Sri Lanka's tally of achievements. They recorded the highest seventh-wicket stand for Sri Lanka versus Australia, with a partnership of 73 before Herath was forced to retire hurt after he was hit on the groin at full pace.

Chandimal fell soon after for the innings top score of 132, as the final few wickets folded and Australia were sent in 356 runs behind Sri Lanka.

David Warner began the innings on an extremely aggressive note, smashing Perera for a first ball six, but he did not last much longer. He was caught by Perera off the part time bowling of de Silva to depart for 11 from just nine balls.

Australia were 21/1 but Sri Lanka's joy ended there, with Marsh and Smith batting out the final session with a greater degree of comfort than any of their batsmen had so far shown all series.

There were still a few nervy moments for the Aussie pair, including two dropped chances by Kaushal Silva at bat-pad, but the boundaries flowed and the defence was sure footed.

The 120-run stand ensured that Australia will remain more than hopeful of reaching parity by stumps tomorrow, while Sri Lanka will hope for a collapse, given that wickets have fallen in clumps all series.