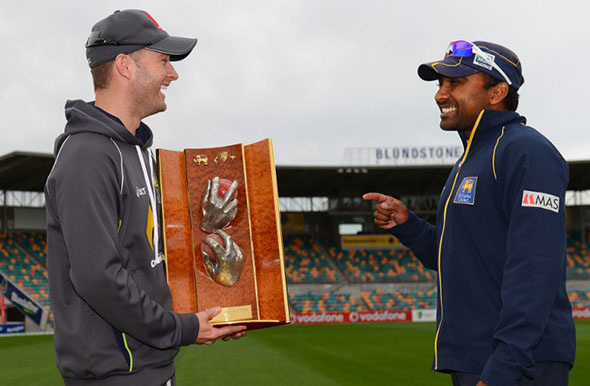 Michael Clarke and Mahela Jaywardene pose with the Warne-Muralitharan Trophy in Hobart on December 13, 2012. © AFP

Australia open the post-Ricky Ponting era with three Tests against Sri Lanka over the next four weeks, desperate to build on the positives from a thrilling series against South Africa and hoping to emerge with the opposite outcome.

The men in baggy green caps went blow-for-blow with the Proteas for much of their three-Test series before falling to a 309-run defeat when the world’s top-ranked Test side finally hit their stride in Perth last week.

The hosts will be confident of coming out on top in Tests in Hobart, Melbourne and Sydney, even if the bowling unit is still counting the cost of injuries and Ponting’s retirement means more than just a new look to the Australian batting line-up.

"Ricky’s departure leaves a massive hole in the dressing room, not just in terms of his batting, but the aura he brings to the dressing room and his intensity around training and his cricket nous," coach Mickey Arthur said after the Perth defeat.

"We’ve got to find a way to fill that. I’ve had a chat to a couple of other players, we need someone to stand up and fill that void."

The space in the team left by Ponting as a batsman has been filled by Phil Hughes, who claims he has mastered the technical problems that twice led to him losing his place in the team.

The 24-year-old is unlikely to dislodge the opening partnership, however, and should bat at number three in his 18th Test with all rounder and former opener Shane Watson slipping further down the order to replace Ponting at four.

The top order has been shaky this year but Mike Hussey and in particular Michael Clarke rode to the rescue to provide a slew of runs against the vaunted South African bowlers in the middle order.

With young guns James Pattinson and Pat Cummins again sidelined by injury, quicks Peter Siddle, Ben Hilfenhaus, Mitchell Starc and Mitchell Johnson are likely to be vying for three spots in the team for the opener in Hobart on Friday.

The Bellerive Oval wicket has proved a seamers’ paradise in recent years but Clarke has shown a marked disinclination to go into a Test match without spinner Nathan Lyon since he took over as skipper last year.

Sri Lanka have never won a single Test, never mind a Test series, in Australia and while they boast a strong batting line-up, their own bowling unit looks a little thin on experience.

Left-arm orthodox spinner Rangana Herath has stepped a little out of the shadow of the retired Muttiah Muralitharan and his 20 wickets in the drawn two-Test series against New Zealand have elevated him to third spot in the ICC bowling rankings.

The art of spin, however, may not be much of a factor in Hobart or Melbourne and only perhaps late on in the final Test at the Sydney Cricket Ground.

What Sri Lanka lack in experience in the pace bowling unit, they have made up for in quantity with Chanaka Welegedera, Nuwan Kulasekara, Shaminda Eranga, Dhammika Prasad and Nuwan Pradeep all included in the 16-man squad.

There is no shortage of experience among the batsmen and in Kumar Sangakkara, skipper Mahela Jayawardene and Tillakaratne Dilshan, they have a core of quality batsmen in their mid-30s keen to bring an end to their Australia win drought.

"When you do get older, you do look for achievements where you haven’t really tasted victory so here and in India (we have) Test matches still to win," Sangakarra said in Hobart this week.

"That’s a great motivator for guys like Dilshan, Mahela, myself and (Thilan) Samaraweera. We’re the older brigade. But whether we get it or not, the key is to really contribute to the side."

With South Africa and Australia enjoying summer at the same time of year, the five-Test series between them that so many cricket fans wanted to see was never likely.

Instead, Sri Lanka have been honoured with Melbourne’s Boxing Day Test and the New Year Test in Sydney (January 3) and they will be determined to ensure the series is not an anti-climax.