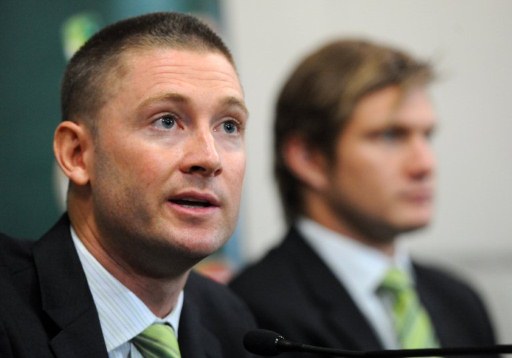 July 26, 2011 (Island Cricket): Cricket Australia have announced a 15-man squad for the upcoming Test tour of Sri Lanka which begins on August 31 with the first Test match at Galle.

Michael Clarke has been appointed captain, while Shane Watson will serve as his deputy on tour.

"We believe the squad has a really good blend of experience and young talented players, who we are sure are ready for the challenges ahead," Australia’s chairman of selectors Andrew Hilditch said in a statement today.

"Phillip Hughes and Shane Watson will again open the batting in what we hope will become a very successful opening partnership for Australia. Phillip richly deserves this opportunity with his Weet-Bix Sheffield Shield performances and of course has already proved he can succeed at international level. He ended the interstate season in great form during the Shield final and has continued on with a great series, featuring three hundreds, on the Australia A tour of Zimbabwe.

"Shaun Marsh comes into the Australian Test squad and has been in our minds for some time as a player who could have a real impact at international level in all forms of the game. Injury impacted at critical times last year however he has worked hard and is in our view ready to seize this opportunity.

“Ryan Harris has recovered well from injury and deserves to come back after bowling so well during the Ashes series. We have also added two exciting young fast bowlers in Victoria’s James Pattinson and New South Wales’ Trent Copeland.

“Trent has earned his position with some fine performances for New South Wales and has bowled very well on the Australia A tour. James is a young fast bowler with the potential to play an important role for Australia in all three forms of the game and we look forward to watching his further development during this tour.

“Michael Beer retains his position in the squad following his debut in Sydney during the fifth Ashes Test where he bowled well, without much luck. It will be an important tour for Michael on grounds where we expect spin to play a major role."

The 23-year-old off-spinner Nathan Lyon’s inclusion over Steven Smith has surprised many.

“Nathan may be a surprise selection, but he impressed all who have seen him in the last year and bowled beautifully during the one-day component of the A squad’s recent tour where he was named player of the series. He is a young man with immense potential and we feel he will take this opportunity should he get the chance to play in Sri Lanka," Hilditch said.

“Steven Smith is unlucky to have missed selection in this squad. We continue to see him as player of the future for Australia in all forms of the game but at this stage we do not feel he has cemented his position as a batsman in the top six or as a leg-spin bowler. We feel he needs to continue to develop as a genuine all-rounder in the shorter forms of the game and play more long-form cricket for New South Wales to push again for Test selection.

“Ben Hilfenhaus did not have as good an Ashes series as he would have liked and we feel he needs to get back to his best, swinging the ball late and hitting the bat hard. We are sure he will do this and he will be very much in contention for selection on the upcoming tour to South Africa.

“Doug Bollinger has been left out of the Test squad. The NSP feels he needs to improve his ability to bowl spells at full intensity and maintain it over the course of a match, particularly in these days of back-to-back Tests.

“The intention of the NSP was to take Jason Krejza to Sri Lanka provided he proved he was bowling at his best. He has had very limited opportunities in Sheffield Shield cricket so the Zimbabwe tour was very important for him. Unfortunately Jason did not bowl as well as we, or i am sure he, would have liked during this tour and therefore he has not been rewarded with selection.

“Since the immense disappointment of the Ashes series, the coaching staff and playing group have worked tirelessly to prepare for the challenge ahead. There is a quiet confidence about the group and we are sure this squad will do all in its power to get the Australian Test team back to where it needs to be in world cricket," Hilditch added.