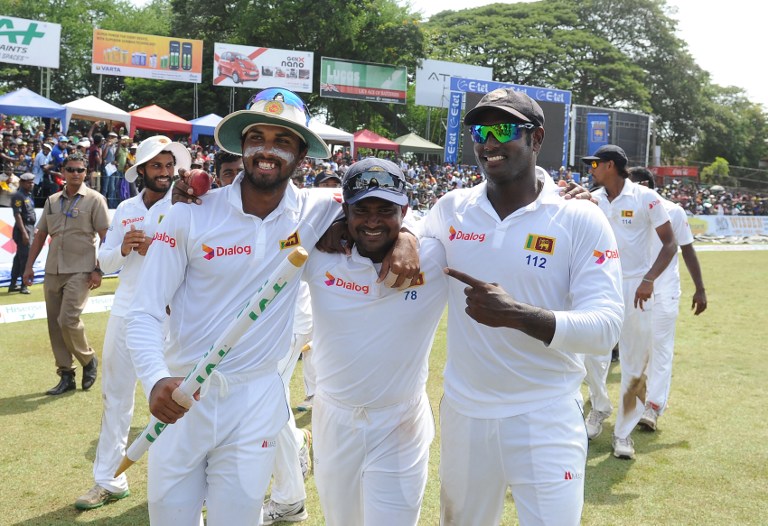 Man of the Series Rangana Herath finished as the highest wicket-taker, taking 28 wickets in the series. © AFP

After a serious scare from an Australian team prepared to fight hard in the morning session, Sri Lanka took nine wickets in the middle session to win the third and final Test by 163 runs on the final day in Colombo to clinch the series 3-0.

Australia were cruising at 100/1 chasing 323 for victory, and Sri Lanka looked in serious trouble of conceding 300-plus in the fourth innings, but Rangana Herath stepped up to the plate yet again and almost single handedly dismissed Australia for 160.

The victory for Sri Lanka ensured they were able to claim just the fourth whitewash in a series of three or more Tests in their history.

Even more remarkably, it was just the fifth time that Australia have been whitewashed in a series of three or more Tests.

Australian batsmen, despite the costly preparation prior to the series, could not combat the guile and skill of Sri Lankan spinners. © AFP

Herath, who was carrying an injury, was again the hero for Sri Lanka, with 7-64 and 13 wickets in the match. This took his wicket tally to an incredible total of 28, four ahead of the next best Mitchell Starc, and won him the Man of the Series award.

"[Herath] was fantastic, he was bowling off one leg," Angelo Mathews said after the match. "He couldn't run and he couldn't jump. He was just landing the ball on one leg and he is unbelievable.

"The batsmen are having a nightmare facing him no matter how well they play spin. Credit should go to this man. He has been a great team man as well."

Sri Lanka resumed day five at 312/8, with Dhananjaya de Silva adding some quick runs alongside Suranga Lakmal (4). The pair put on exactly 50 for the ninth wicket, with de Silva smashing 65 not out, before Sri Lankan skipper Mathews decided to call the team in.

Sri Lanka declared with the score on 347/8, and de Silva's effort ensured he was the first Sri Lankan batsman to score a century and make a half-century in the same match, coming in at number-seven or lower.

Things did not start at all well for the hosts, with Australia racing away at four runs an over for the first hour of their innings. As is often the case, David Warner played the aggressor's role, but it was actually Shaun Marsh who was the first to go, caught brilliantly by Kusal Mendis at short-leg.

The older Marsh fell for 23 on the stroke of the lunch break, but even then things did not look overly positive for Sri Lanka, as Warner added 23 with his captain Steve Smith. However, once Smith fell — clean bowled by Herath — it was a procession of Australian wickets.

Warner too was bowled, this time by Dilruwan Perera, and before him Adam Voges was LBW to Herath.

The dangerous David Warner looked to have a response to the spin attack, but was craftily bowled around his legs by Dilruwan Perera. © AFP

When Moises Henriques was unlucky to fall for a tough run-out by Mathews, and Mitchell Marsh top-edged his way to oblivion off Herath, Sri Lanka knew they had it in the bag at 123/6.

Mitchell Starc entertained the crowd with a few slogged boundaries, but he too fell to Herath, as did Peter Nevill, caught by an elated Mathews.

It was fitting that Herath, who claimed a hat trick in the second Test, was able to wrap up the innings when he had Nathan Lyon LBW for 12.

"He's a very tough character to face," Australian captain Smith said of Herath. "He's always at you, he's always at your stumps, he changes his pace beautifully and bowls from different parts of the crease, changes his angles up. You never really get a freebie off him or an easy boundary.

"He is a terrific bowler in these conditions and he has had a magnificent series."

"We have been outplayed in every facet of the game," Smith, who had not lost a Test match as captain prior to this series, conceded.

For a Sri Lankan team who were not even expected to win one Test, to clean sweep the highest-ranked team in the world must surely stand as one of the finest achievements in the history of the little teardrop island.