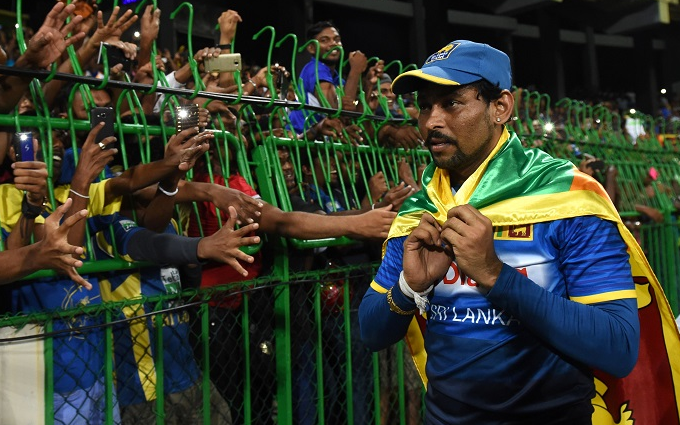 Sri Lanka could not pull off a win for their departing legend and lost the two-match T20 series 2-0. © AFP

After a dull batting performance by Sri Lanka, yielding just 128 runs and Glenn Maxwell smashing 66 from only 29 balls, it looked like Tillakaratne Dilshan's final match for his nation would be a one-sided affair.

But a stunning Australian collapse, losing four wickets for just six runs, ensured that it was far from the case, with the visitors claiming a tight four-wicket win in the second and final T20 match of the series in Colombo on Friday.

Earlier in the evening, with the home side losing the early wicket of Dilshan, Sri Lanka made a relatively cautious start to their innings, but then were particularly severe on Maxwell.

Dilshan was clearly devastated following his dismissal for just one, saluting the crowd and kneeling to acknowledge the almighty before walking back to the dressing room.

Maxwell's opening over went for 16 runs and Sri Lanka made their way to a respectable 43/1 off five overs. James Faulkner brought Australia back into the game in the very next over, when he had Kusal Perera (22) caught off a huge top-edge by Australian captain David Warner.

Faulkner then induced a leading-edge, this time from the new batsman Dinesh Chandimal (4), as he was caught and bowled by the canny paceman. With Kusal Mendis getting a tough LBW decision off Adam Zampa, Sri Lanka were in a serious hole at 58/4, with only Dhananjaya de Silva anchoring the innings amid the frenetic fall of wickets.

Chamara Kapugedera and de Silva stitched together an 18-run stand before yet another collapse ensued — Sri Lanka went from 76/4 to 88/7. It was a string of ugly dismissals and it seriously harmed the home side's chances of sending Dilshan on his way with a win in his final international appearance.

The run-rate was impacted as the tail came in, and Warner placed fields that enabled him to cut off potential boundaries for de Silva, who was Sri Lanka's last hope at the crease.

A packed house at the R. Premadasa Stadium was screaming with delight at a protracted John Hastings over, the last delivery of which was a no ball, but spinner Sachithra Senanayake did not make good use of the free hit as Sri Lanka went into the final over on 123/8.

There was silence in the stands when James Faulkner had de Silva caught off a full-toss. The successful bowler was Mitchell Starc, who had struggled earlier on. The young de Silva had fallen for a valiant 62, striking five boundaries off 50 balls, but Sri Lanka could only muster a paltry 128 off their 20 overs. It was the lowest score in all Sri Lanka-Australia T20I encounters.

Although Warner survived a close LBW shout early on, Australia were cruising to victory with Maxwell simply carrying on from his magnificent 145 in the previous match. Warner seemed to be a mere spectator as Maxwell reverse-swept sixes, paddled and punched his way to 66.

When Sri Lanka finally claimed his wicket it was an ugly dismissal for the man they call Maxy, as he was bowled by Seekkuge Prasanna, edging the ball back onto his stumps. At 93/1, and Australia needing just 36 more, the damage had been done. Maxwell had slammed seven boundaries and four sixes to put Australia in the driving seat.

But the Aussies inexplicably collapsed, going from 93/1 to 99/4, with Prasanna even bowling that greatest of rarities in a T20 match: a maiden over.

The new batsmen, Matthew Wade and Usman Khawaja, simply couldn't seem to deal with Sri Lanka's now-deadly spin attack that had seemed so limp when Warner and Maxwell were at the crease.

It was thanks to Maxwell's early pyrotechnics that the visitors could afford to patiently eke away at the total without needing to take many risks. Sri Lanka's captain Chandimal tried everything to keep Sri Lanka in the game, including bowling the departing Dilshan, who claimed a wicket off his last ball in international cricket.

With Khawaja falling for six, after a steadying but not altogether convincing partnership of 14 with Wade, the hosts still had some hope of causing one of the most-shocking comebacks in T20 history. Travis Head was lucky not to edge the ball back onto his stumps on his first ball.

Dilshan got the breakthrough, having Wade caught by Chandimal for 14. At 120/6, the game just kept throwing up surprises. Head was the man to finish it for Australia, with a missed catch by Senanayake costing six.

But Sri Lanka had not disgraced themselves. Australia were cruising and no one would possibly have thought the game would last until the 17th over. It may not have been the finish Dilshan deserved, but it was a nail-biting finish nonetheless thanks to Sri Lanka's fighting spirit.