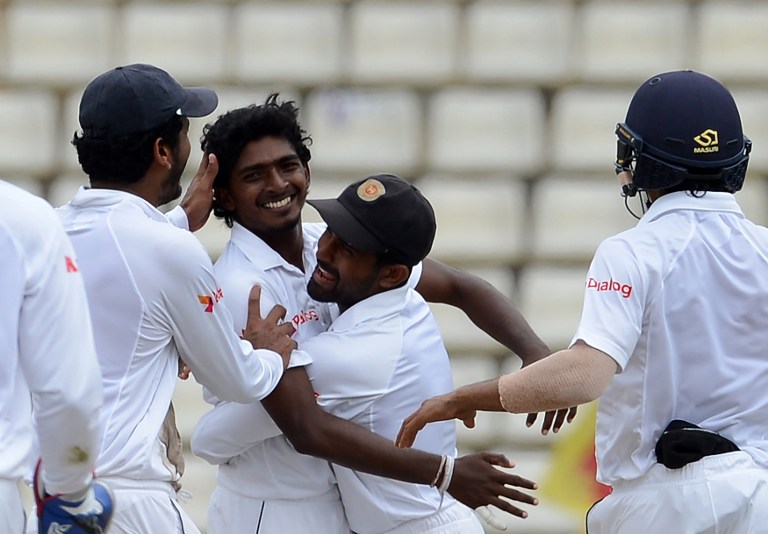 Sri Lanka continued to exert their stronghold over the visiting Australians in the opening match of the three-Test series, claiming three wickets before bad light ensured that no further play was possible on day four.

Australia were 83/3 at early stumps, still needing 185 to win, while Sri Lanka will require seven more wickets to complete a historic win, with Steve O'Keefe potentially unable to bat.

Lakshan Sandakan continued to impress on debut with the wicket of Joe Burns for 29, while Rangana Herath remained a danger man, claiming the early wicket of David Warner (1) to leave Australia 1/2.

Usman Khawaja took one risk too many and fell leg-before trying to sweep a full ball to the boundary. © AFP

The other wicket-taker was Dilruwan Perera, who had Usman Khawaja LBW for a counter-attacking innings of 18 from just 23 balls. Khawaja struck three fours and had added 31 in quick time with his captain Steve Smith, but was unable to go on with the job.

Smith remained unbeaten on 26 from 54 balls, while his partner Adam Voges was on nine from 25 balls. Voges was ruled out first ball, but decided to review a close LBW shout against Perera, and luckily had the decision overturned — DRS suggested the ball was missing leg stump by a slight margin. The blow would have left Australia in trouble at 64/4, but Sri Lanka will still hope that their spin-trio can claim the remaining Australian wickets on the final day.

Earlier in the day, rain interruptions all but ruled out most of the morning session, with centurion Kusal Mendis dismissed for 176 almost immediately, having added only seven runs to his overnight score, before he was caught behind by Peter Nevill off the bowling of Mitchell Starc.

Herath played an entertaining and potentially crucial cameo of 35 from 34 balls, which included six fours. The veteran spinner added 30 for the last wicket with paceman Nuwan Pradeep (10 not out), before he was caught by a spectacular diving catch from substitute fieldsman Moises Henriques. Henriques was on the field for the injured O'Keefe, and took a great catch low to the ground, stunning even Herath, as he accepted adulation from the rest of his Australian teammates.

Sri Lanka will be dearly hoping that they can wrap up this Test match having made such a poor start and been written off even before the tour started. The number-one ranked Australia, on the other hand, will be keen to avoid embarrassment against a much-lower ranked team, who have been going through a poor patch in recent times.