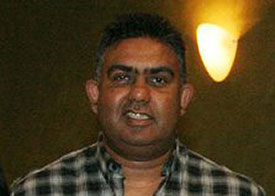 With the ICC Cricket World Cup fast approaching people have begun to reminisce Sri Lanka’s historical triumph in 1996 in Lahore. Even after 15 years, watching the highlights of that epic encounter gets your adrenalin pumping and the fact that this World Cup was won at the expense of Australia remains the icing on the cake.

Talking of the triumph, people vividly remember Aravinda de Silva’s counter-attack on the Indian bowlers in the semi-final, with literally nothing on the board. They talk of Aravinda’s epic hundred in the final that enabled him to join Sir Viv Richards, Wasim Akram, Clive Lloyd and a handful of individuals who won the Man-of- the-Match award in a World Cup final.

Then there’s Arjuna Ranatunga and that late cut to bring up Sri Lanka’s most famous sporting victory – it will be etched in our memories forever, but there’s no mention of Asanka Gurusinha (a/k/a Gurusinghe), the second highest run getter for Sri Lanka in the tournament.

Gurusinghe accumulated 307 runs in the competition in six games ending the tournament with a half-century that laid the foundation for Sri Lanka’s win in the final. As Aravinda de Silva reminisced recently, in that Lahore final, as pressure started mounting, there was the question in the middle whether they should attack. Aravinda volunteered, but Gurusinghe unselfishly told Aravinda that it was vital that he remained till the end, to finish it off, and he willingly accepted to step up the run rate.

Twelve runs followed immediately in a Warne over.

"Some of the innings he played were crucial especially in the final. There was this stage when we had to accelerate the run rate. And I asked him should I take the risk, but he just asked me to hang in there and took 12 runs from a Warne over," De Silva remembered.

With things under control, there was a mid pitch discussion again whether to put the game beyond Australia by giving the charge and once again Gurusinghe took the initiative and whilst trying to attack Paul Reiffel was cleaned up for 65.

He had done the spadework, but it was left for the glamour boys to do the finishing job.

"The members of the team know the roles we played. I knew I am not as stylish or as flamboyant as Aravinda, Arjuna, or Sanath. I am fine with that and I have absolutely no issues. People inside knew what exactly we all did," Gurusinghe said earlier this week speaking to The Island newspaper in Sri Lanka.

Indeed, those who were involved highly acknowledge his role in the World Cup triumph.

"Gura is one of the hardest hitters of the cricket ball that I have ever come across. People talk of Sanath and Kalu being severe on bowling attacks, but I tell you what, Asanka could hit bowlers out of the park at will," World Cup winning captain Arjuna Ranatunga reminisced.

Barely a couple of months after the success Gura was gone. He had just turned 30 when he retired prematurely from international cricket and migrated to Australia where he played for North Melbourne.

By the time the next World Cup came, Sri Lanka’s players had extremely lucrative central contracts and equally impressive match fees, but Gura had gone. Once again the glamour had eluded him and along with glamour he had missed out on a comfortable lifestyle.