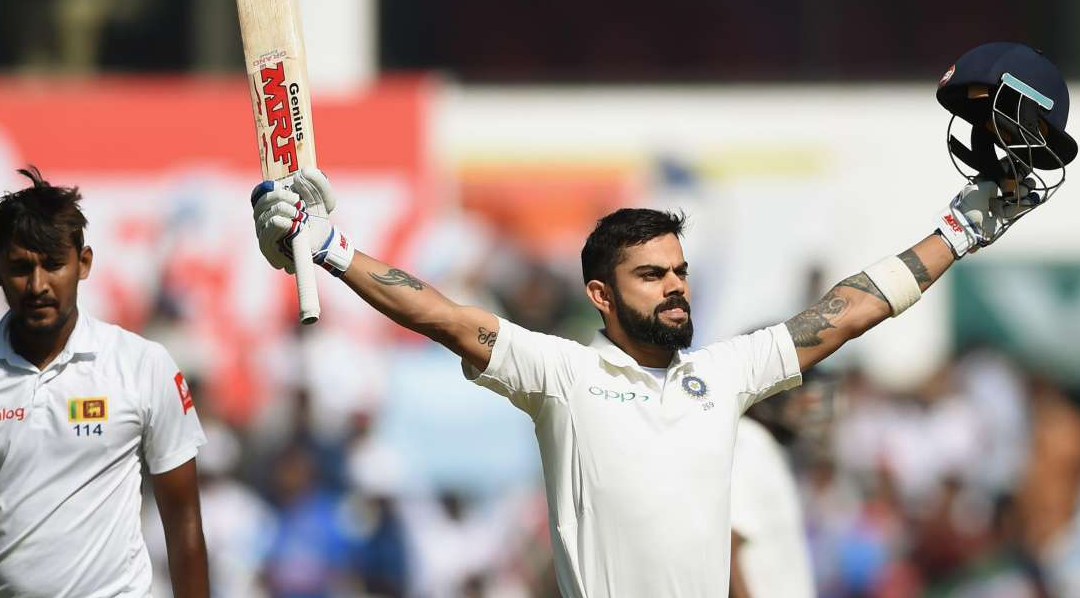 Since September last year and until the conclusion of the series against Sri Lanka this month, India had hosted five teams and played six Test series overall. Two of those, in 2017, were against Sri Lanka at home and away. Having hosted India in August, Sri Lanka visited their sub-continental neighbours in November for a three-Test series in Kolkata, Nagpur and Delhi.

This wasn't initially a part of the ICC's plans though, as the Future Tours Programme had Pakistan slated to visit India for a full series based on a Memorandum of Understanding between the two cricket boards, but without government sanction (owing to the frosty relationship between the two countries), no bilateral series would be possible. Consequently, and not for the first time, Sri Lanka stepped in. They had once similarly toured India in 1993-94 when another India-Pakistan series was scrapped.

The lack of interest in the build-up to this Test series was palpable, given the excessive India-Sri Lanka contests in recent years and Sri Lanka's shambolic performance when they hosted the Indians just over two months prior. Sri Lanka lost every game on that occasion — across the three formats — prompting fears the return series would just be more dull whitewashes. A surprise Test series win in October against Pakistan in the UAE sparked optimism, but Sri Lankan cricket quickly descended into chaos again after they were vanquished by Pakistan in the limited-overs matches that followed.

Before the India series began, expectedly, the saturation factor was brought up again. India captain Virat Kohli subtly stated it was an issue and said it would be up to the fans to decide if India v Sri Lanka contests had lost its sheen. Poor spectator turnout for all three games, particularly at the Eden Gardens, was proof the fatigue was real. Mid-series, there was a debate on Indian national television questioning the very existence of this series. Panel experts suggested India would have benefitted more had they flown early to South Africa to prepare for their winter tour instead of hosting Sri Lanka. Perhaps India could have rested some of their Test stars and flown them early to South Africa to acclimatise, another pundit suggested. Player burnout was the main talking point when Kohli, arguably the most powerful man in Indian cricket, brought up the issue, referring to India's punishing schedule.

What Kohli did ask for, though, was "wanting to be uncomfortable" and for his side to be properly tested ahead of South Africa. While India did eventually take the Test series 1-0, registering their ninth-successive series win (equalling the world record set by Australia), they were stretched in phases by underdogs Sri Lanka.

Kohli got what he asked for on the opening day of the rain-interrupted first Test at Kolkata. Make that ball No. 1, when Suranga Lakmal had India's K.L Rahul caught behind off the very first ball of the series. In conditions that closely simulated that of South Africa, Lakmal's impressive swing and seam bowling reduced India to 17 for 3 on the first day, with his personal figures reading 6-6-0-3. He went on to finish with 4 for 24, as India were bowled out for 172.

India hit back by reducing Sri Lanka to 201 for 7, but the old warrior Rangana Herath made a valiant 67 at No. 9 to frustrate the home team and earn his side an innings lead of 122. India's  top-order put on a better show in the second innings, but the team looked far from secure when they were four down with a lead of 91. The man who stood in the way of Sri Lanka's prospects of going 0-1 up was Kohli, whose calm and positive unbeaten 104 — also his 50th international century — took India to a position from where they could declare. His strike-rate of 87 gave India the belief there could be enough time to push for an unlikely win.

India's sporting declaration left Sri Lanka chasing a target of 231 in 47 overs. The tables dramatically turned when Bhuvneshwar Kumar and Mohammed Shami reduced Sri Lanka to 22 for 4, with an outstanding display of swing bowling. Sri Lanka narrowly avoided defeat because of fading light, having lost seven wickets for 75 and another 20 overs left at stumps. It was a finish rarely seen in traditionally spin-dominated India Tests — Indian fast bowlers took all 17 wickets.

A Test to forget for Sri Lanka in Nagpur

The talk of 'conditions' continued to be a dominant topic as the series wore on, albeit controversially. Kohli spoke again of wanting testing conditions, but neither the pitch nor conditions in Nagpur offered such. What it did present, though, was a chance for India to stack up batting records against a bowling attack that went from penetrative to toothless in the space of days.

Sri Lanka captain Dinesh Chandimal's hopes of pulling off a "miracle in India" were dashed quickly, with his side getting bowled out for 205 and his bowlers allowing India to amass 610 for 6. India produced centuries with ease — there were four in all. Kohli lead the way scoring 213. Lakmal went wicketless and off-spinner Dilruwan Perera conceded a double-century with the ball.

It was the Indian captain's 10th international century in 2017, and with it he broke the world record for the most international centuries by a captain in a calendar year, surpassing Ricky Ponting. Ravichandran Ashwin became the fastest to 300 wickets, in terms of number of Tests (54), beating Dennis Lillee's record of 56. India's innings and the 239-run win equalled their best-ever Test win, while for Sri Lanka it was their worst ever. It was Sri Lanka's seventh Test loss in 2017, equalling the most defeats in a calendar year (2015). India registered their 32nd win across all formats in the year, beating their previous-best of 31 in 2016. 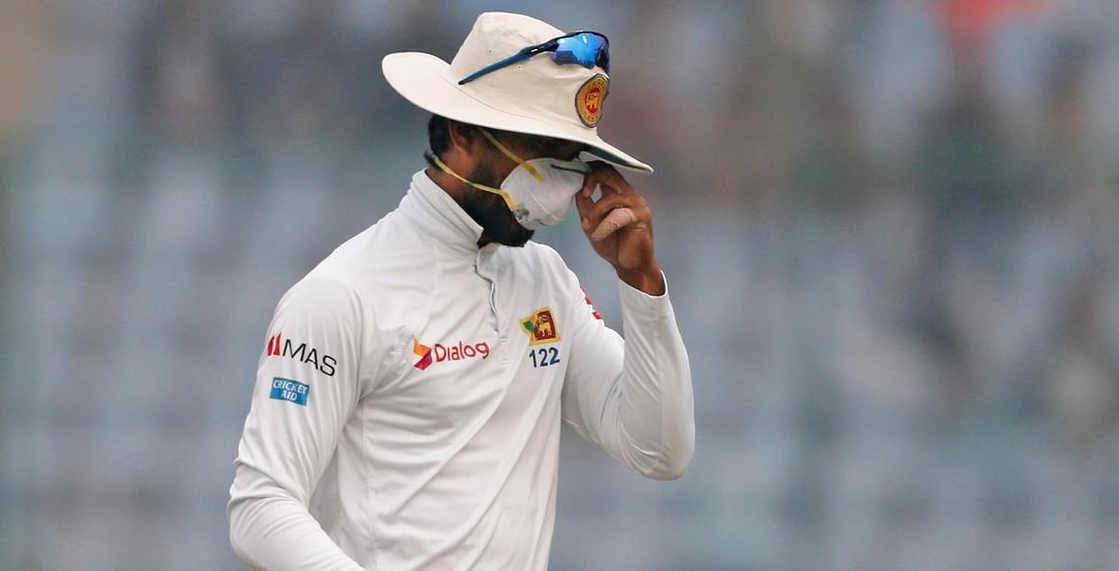 Sri Lanka's listlessness extended to the first couple of days of the third Test in Delhi. India piled on 536 for 7, thanks to hefty contributions from Murali Vijay (155) and Kohli (243). The unstoppable Kohli set a world record for the most double-centuries by a captain in Tests (6), going past Brian Lara. He astonishingly scored all six in just 22 Tests.

This Test, however, was overshadowed by controversy. The logic of scheduling a match in the national capital, which was gripped by arguably its worst air-pollution crisis, was called into question. While air pollution during the Delhi winter has been a perennial problem, this year it reached critical levels, with crop burning in neighbouring States (combined with the vehicular pollution) blamed for it.

During the second day, several Sri Lankan players were seen wearing masks, highlighting how difficult it was to breathe, and it led to stoppages in play. Some of their fast bowlers left the field sick. What followed was an unusual crisis: Sri Lankan support staff were on standby to take the field after the visitors found themselves short of fielders. Kohli declared, and when the Indians took the field, they weren't wearing masks. Social media was abuzz with theories, claiming the visitors were seeking excuses to go off.

But images of Lakmal puking on the field, and later Shami too spilling out his guts (more Sri Lankans threw up in the dressing room), all captured on camera, proved this was certainly no sly tactic by one team. Sri Lanka Cricket reportedly complained to the ICC about the pollution and it cast doubts over whether Delhi would be allowed to host winter Tests in the future. The Indian coaching staff went as far as to question the Sri Lankan fast bowlers' fitness, but Shikhar Dhawan on the other hand implied Sri Lanka's concerns were probably genuine.

In spite of the discomfort, Sri Lanka showed the kind of resolve that was missing in Nagpur to save the Test. Angelo Mathews returned to form with a century and Chandimal led from the front with 164. India always had their noses in front through the Test, declaring to set Sri Lanka 410 to win. Having picked up three wickets late on day four, a 2-0 series win seemed likely.

But on a relatively clearer fifth day, led by Dhananjaya de Silva, a plucky Sri Lanka resisted. There appeared to be no intention of pushing for victory, but through it all, de Silva batted positively to score his third Test century. He eventually was forced to retire hurt from a stiff thigh, but de Silva had given his team more than a chance of avoiding defeat, before debutant Roshen Silva and the feisty Niroshan Dickwella secured the draw.

Though India were the dominant side in the three-match series, the number of catches grassed should be troubling. The slip catching was shoddy, with Mathews dropped twice (the first very early in his innings) and that proved costly. The ground fielding on the fifth day of the final Test was uninspiring. If the conditions don't suit spin, even the best in the game, Ashwin and Ravindra Jadeja included, can look ineffective.

Did India get the conditions they wanted ahead of South Africa? Save for Kolkata, no. There was insufficient moisture on offer in surfaces in Nagpur and Delhi to test their batsmen. What they will be pleased to reflect on is how their fast bowlers took them to within striking distance of an unlikely win in the first Test.

Sri Lanka's batsmen found their mojo but a tad too late. The series didn't unearth a new sensation, but with consistency in team selection, Sri Lanka seem headed towards a settled line-up. At least, they weren't the train wreck that took on India a few months earlier.