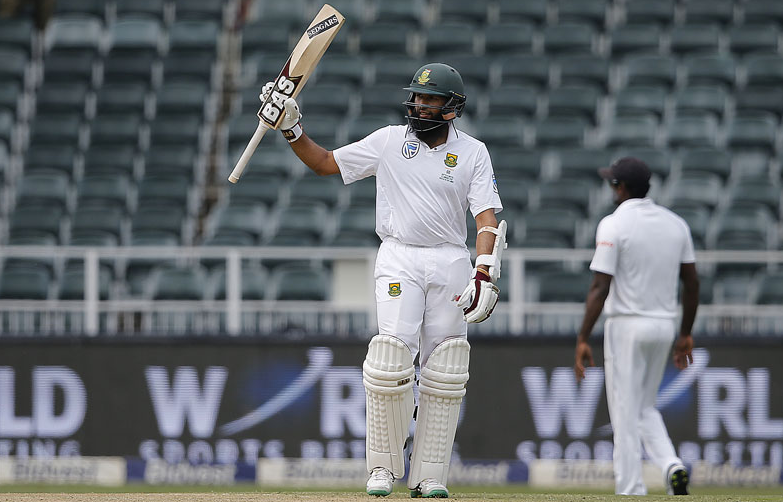 Hashim Amla and JP Duminy made Sri Lanka toil, scoring over 300 runs in the day. © AFP

Sri Lanka conceded nearly 350 runs and claimed only three wickets on day one of the third and final Test in Johannesburg.

The day truly belonged to Hashim Amla, playing in his 100th Test, and his partner JP Duminy. The pair struck 125 not out and 155 respectively, as South Africa finished the day on a commanding 338/3.

South African captain Faf du Plessis won the toss and boldly elected to bat first, trusting Dean Elgar and Stephen Cook to negotiate the new ball on a green track. Despite some good pressure on an excellent line and length from Sri Lanka's bowlers, they duly did so largely without trouble. When the edge was found, it was played with soft hands so that it did not carry to slip.

It is somewhat of an irony that, for all the talk of Angelo Mathews's poor captaincy and his insistence on bowling his gentle medium pacers on green seamers, he was the one to claim the opening breakthrough.

Sri Lanka's skipper trapped Cook plumb leg-before on the front foot. He oddly opted for the review after being given out, as to the naked eye it was hitting middle stump, and replays confirmed this, but it did still very nearly save him; Mathews was just centimetres from overstepping for a no-ball.

Nonetheless, it was given out. Sri Lanka made a double-breakthrough after Lahiru Kumara came on and claimed Elgar with an excellent short delivery that reared up on Elgar and claimed the edge, before it was snaffled comfortably by Dimuth Karunaratne at first slip.

The Wanderers crowd was silenced, but only temporarily. The pair of Duminy and Amla survived through to lunch with the score at 79/2. The only chance came when Amla was dropped on five.  Although it was a low chance, the ball did carry and was dropped by Dhananjaya de Silva in the gully. Once again, the unlucky bowler was Suranga Lakmal, who in this series has gone from pedestrian workhorse to genuine spearhead.

The pair came back out to dark and stormy conditions for the second session. Amla was on a slightly nervy six, while Duminy, as in their big partnership in the first Test, looked far more assured on 23. Mathews again trusted himself to open the bowling after the lunch interval and had Amla edging nervously, but again, was edging with soft enough hands to make sure nothing carried.

Lakmal began well again from the other end, but Duminy was up to the task, driving him crisply down the ground when he missed his length and bowled half-volleys.

The 50 partnership was brought up soon, as Mathews was overstepping at the bowling crease again and the Sri Lankans' confidence dropped.

The South African 100 was brought up by a sparkling, sublime cover drive from Duminy. He had dominated the scoring, making his way merrily to 43, while Amla seemed stuck on six. Amla's confidence began to shine after he cut Nuwan Pradeep off the back foot for a superb boundary, oozing typical Amla class.

Sri Lanka's fielding effort began to flag as Duminy brought up his 50. Amla was still slow by the time of the drinks break, but was definitely looking more assure by the time Mathews turned to Herath. Amla duly welcomed the literal change in pace, using his feet smoothly for a couple of drives to make his way to 31.

By the next over, he was finally in full flight. He barely seemed to tap a full pitched ball from Lakmal but such was the exquisite timing that it raced to the boundary. The scratchiness was gone, in its place was the Amla South African fans had thirsted for.

Amla was stuck on 49 for what seemed like an eternity, but showed as much relief as someone as becalmed as Amla could show when he finally reached 50, his first in nine innings. The milestone came just prior to the tea break, with Duminy at the other end on 87 and the partnership on 148.

The pair nearly doubled their stand in the final session of play, as Sri Lanka completely deflated. Even the effectiveness of Herath was blunted.

Duminy raced to his century shortly after tea, and whilst a nervous edge may not have been how he dreamed of bringing it up, he nonetheless looked elated when the milestone came. Pradeep looked flat as he walked back to his mark, with the score at 215/2.

Duminy's century seemed to boost Amla's confidence, his scoring rate too went through the roof. Cover drive after cover drive flew off the bats of both men, as Sri Lanka were pummelled into submission. The part time spin of de Silva was also powerless at this point to tempt the pair into a false stroke.

By the time Amla brought up his century, dancing down the track to Herath, the score was 293/2. It was typical of a man who had spent his life fighting stereotypes and expectations to bring up a dazzling century in a milestone Test, just at the point when people were beginning to question whether his time was up. In doing so, Amla became just the eighth batsman in Test history to score a century in his 100th Test.

Duminy brought up his 150 but fell to Kumara and the second new ball late in the day, edging to Kusal Mendis for 155. The nightwatchman Duanne Olivier survived the remainder of the over, with Amla not out on 125.

Sri Lanka will hope for damage limitation with the new ball tomorrow, while South Africa will want to double their score and push for a whitewash via an innings win.