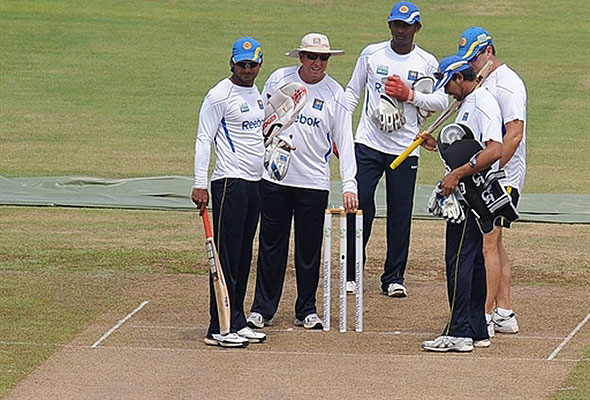 January 25, 2011 (Island Cricket): With less than 30 days remaining for the start of the ICC Cricket World Cup 2011, the pitch at the R. Premadasa Stadium in Colombo is raising concerns. Both semi-finals in the ongoing inter-provincial limited over tournament played there have resulted in low scores, prompting fears that the pitch maybe unsuitable for the World Cup.

The R. Premadasa Stadium will host seven matches including three of Sri Lanka’s six group stage matches, a quarter-final and a semi-final. The stadium has been under extensive renovation since 2009, but hosted the second Test match between Sri Lanka and West Indies in November last year. On that occasion, the pitch showed no signs of being unsuitable for international cricket.

In the first semi-final played between Basnahira and Wayamba on January 23, Wayamba were bowled out for 152 chasing just 221. Similarly, in the second semi-final at the same venue the following day, Kandurata were skittled out for 141.

The state of the pitch forced Mahela Jayawardena, who made 39 runs from 66 balls in the first semi-final for Wayamba, to take his concerns to Sri Lanka Cricket (SLC) officials, according to the Daily Mirror newspaper in Sri Lanka.

"Officials have now decided to get the top layers of the R. Premadasa wickets re-done again," the paper noted.

All eyes will now be on today’s inter-provincial limited over final played at the venue between Basnahira and Kandurata.

The R. Premadasa Stadium will host its first match of the World Cup when Sri Lanka play Pakistan on February 26.