September 2, 2011 (AFP): Australia closed in on a convincing victory in the first Test in Galle on Friday after Sri Lanka’s top order was ripped apart for a second time.

Sri Lanka, set an improbable target of 379 to win on a crumbling wicket, were tottering at 120-5 at the close of the third day’s play at the Galle International Stadium.

Former captain Mahela Jayawardene provided a batting lesson for his team-mates, making an unbeaten 57 with the help of eight boundaries.

Angelo Mathews was the other not out batsman, on 32, having put on 52 runs for the sixth wicket with his senior partner.

Australia start the fourth day’s play on Saturday needing five more wickets to win and take the lead in the three-Test series, their first in Sri Lanka since 2004.

Sri Lanka need to defy history to stop the tourists – the highest fourth innings score at the ground is 210 by New Zealand two years ago.

The hosts, who were shot out for 105 in the first innings, succumbed to a hostile three-wicket burst by Ryan Harris and probing seam bowling from Mitchell Johnson and Shane Watson.

Harris trapped Tharanga Paranavitana leg-before with the first ball of the innings and then bowled Sri Lankan captain Tillakaratne Dilshan in his fourth over to leave the hosts 15-2. 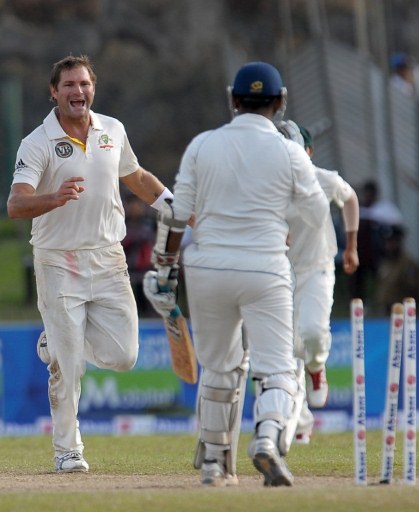 Kumar Sangakkara would have been another Harris victim, but survived a review for leg-before off the first ball he faced.

Harris, a 31-year-old from Sydney playing only his sixth Test, followed his defiant 23 in Australia’s second innings with 2-15 in his first five overs.

Sangakkara and Jayawardene, Sri Lanka’s two most experienced batsmen, attempted to rebuild with a 37-run stand on either side of the tea break.

Watson, who took three wickets in 10 balls in the first innings, broke the partnership when Sangakkara (17) fenced a vicious rising delivery to Mike Hussey at gully.

Thilan Samaraweera edged a ball from Johnson to wicket-keeper Brad Haddin for a 14-ball duck, leaving Sri Lanka on 63-4.

Harris bowled Prasanna Jayawardene to complete a pair for the Sri Lankan wicket-keeper, but Mathews dug in to ensure the game went into the fourth day.

Australia resumed at 115-6 after the entire morning session was wiped out by heavy rain and were dismissed for 210 in their second innings midway through the post-lunch session.

Australia added 15 runs to their overnight score when they lost the wicket of Johnson, who top-edged a high catch off Herath which was taken comfortably by the wicket-keeper.

Usman Khawaja put on 40 for the eighth wicket with Harris before falling leg-before to Chanaka Welegedara for 26 to leave Australia 170-8.

Australia’s total was boosted by a last-wicket stand of 32 between debutants Trent Copeland and Nathan Lyon.

Lyon made 13 before he was caught in the deep off Dilshan, leaving Copeland unbeaten on 23.