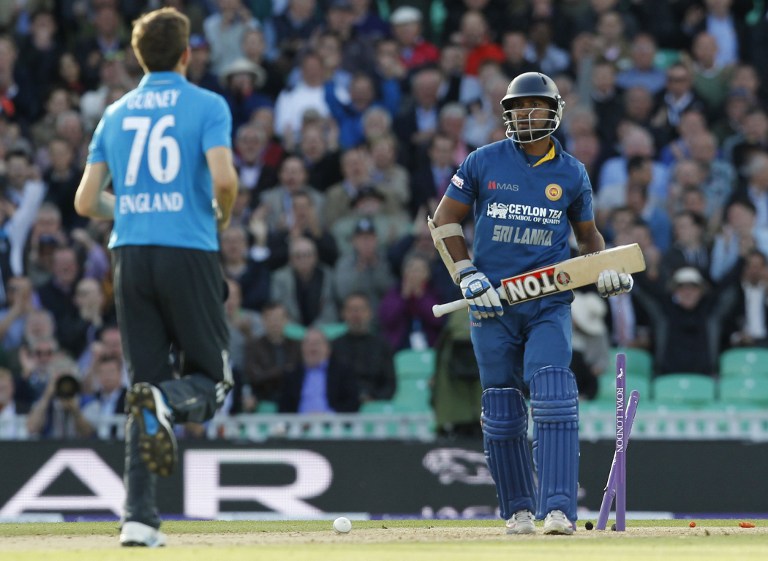 Sri Lanka lost Kumar Sangakkara’s prized wicket after he was bowled off an inside edge. © AFP

Chris Jordan starred with both bat and ball as England set off on the road to next year’s World Cup with an 81-run win over Sri Lanka in a rain-marred one-day international at The Oval on Thursday.

The Sussex all-rounder’s belligerent 38 not out off just 13 balls propelled England to a total of 247/6 in an innings reduced by rain to 39 overs.

And, on his former Surrey home ground, the Barbados-born Jordan took three 3/25, including three wickets for just three runs in 12 balls.

Sri Lanka, chasing a target of 226 in 32 overs after a fresh downpour, never recovered and finished with 144 all out in 27.5 overs when Lasith Malinga was bowled by Ravi Bopara under The Oval floodlights.

"I came in to try to score with a flurry and I’m glad it came off," man-of-the-match Jordan told BBC Radio after England took a 1-0 lead in this five-match series.

"We wanted as many runs as we could because Sri Lanka bat really deep and we were wary of that."

England captain Alastair Cook added: "Everyone played well and it was an impressive batting display. Those 30 runs at the end of the innings really made the difference."

Disappointed Sri Lanka captain Angelo Mathews did not hold back in criticising his team.

"A pretty poor performance by our whole team, starting off with our bowlers but the English batsmen did well.

"We need to keep our heads held high and come back strongly."

England, in their first match in the format against a Test nation since Peter Moores returned as head coach, quickly reduced Sri Lanka to 19/2.

James Anderson struck fifth ball, with Sri Lanka yet to score a run, when he had Lahiru Thirimanne LBW before left-arm paceman Harry Gurney had Kumar Sangakkara playing on for eight.

Sri Lanka were 60/2, in pursuit of a target of 259 in 39 overs, when rain stopped play for the second time in the match.

Come the resumption, Sri Lanka needed to score at nine an over and, unsurprisingly, lost wickets in the face of such a stiff run-rate.

Tillakaratne Dilshan slashed at Jordan and was caught on the third man boundary by Gary Ballance.

Dinesh Chandimal was caught behind off Jordan and three balls later Nuwan Kulasekara skyed the paceman to wicketkeeper Jos Buttler to leave Sri Lanka struggling at 108/6.

Cook, once labelled a "donkey" in the field by predecessor Michael Atherton, then took an excellent running catch to dismiss Mathews.

Earlier, England were in trouble at 152/5 when Sri Lanka off-spinner Sachithra Senanayake took two wickets in seven balls to remove Ballance (64) and Bopara.

But England, as Sri Lanka had done in their nine-run Twenty20 win at The Oval on Tuesday, enjoyed a late flurry with the bat.

They struck 93 off the last seven overs, Jordan ending the innings with a straight six off Malinga.

England opener Ian Bell made a near run-a-ball 50 previously in the day before a thunderstorm delayed play for two-and-a-half hours.