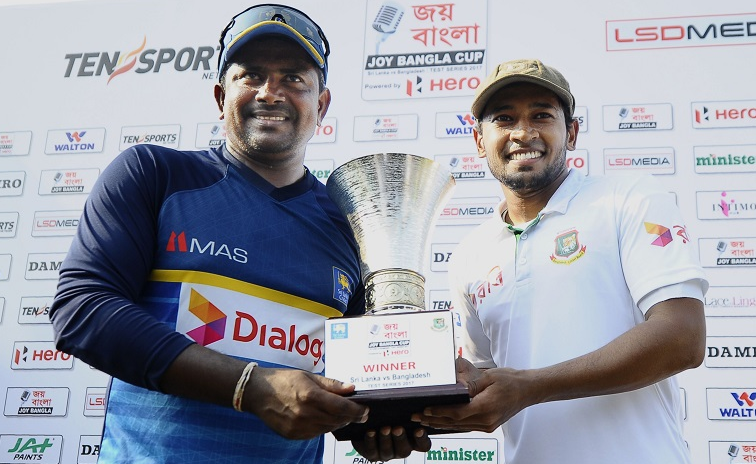 Bangladesh squared the two-match Test series with victory in their landmark 100th Test match, which was also their first-ever Test victory against Sri Lanka. © AFP

It was a dream come true for Bangladesh in Colombo, as they secured a memorable victory against Sri Lanka on day five of a thrilling contest in the second and final Test at the P. Sara Oval.

The win, a rare achievement for Bangladesh away from home soil and also their first-ever Test victory against Sri Lanka, was the perfect result for the country's 100th Test match, and that too against a competent Sri Lankan outfit who threatened on several occasions to steal the match from the visitors.

"We made too many mistakes when fielding and batting," conceded Sri Lanka skipper Rangana Herath after the shock defeat, which he said was one of the worst defeats of his career.

Sri Lanka, who had beaten Bangladesh 15 times in 17 Test matches before this, were considered to be tough to beat in home conditions and they are ranked higher than Bangladesh in the Test rankings. They had whitewashed top-ranked Australia in the series at home prior to this one and won the first Test soundly, making this defeat to Bangladesh not only unexpected but a new low for them after being whitewashed in the three-match Test series in South Africa just two months ago.

Herath pointed to dropped catches which, he said, "was the main reason" for the loss but Bangladesh bowlers deserve much credit for they troubled the Sri Lankan top order, taking regular wickets at crucial times, while their batsmen produced century partnerships and positive batting.

Sri Lanka started the day 139 runs ahead of the tourists and with two wickets in hand. They looked to be heading to safer waters in the first session, as Dilruwan Perera and Suranga Lakmal survived long enough to add another 80 runs in a brave ninth-wicket stand.

Sri Lanka's innings was then brought to a close, as both Perera and Lakmal lost their wickets in a short span, with the hosts' second innings total of 319 runs setting Bangladesh a total of 191 for a famous victory.

It took less than eight overs for Herath to strike, dismissing Soumya Sarkar and Imrul Kayes in consecutive deliveries to once again claw the home side back into the match.

It was a gutsy third-wicket stand between Tamim Iqbal and Sabbir Rahman that turned the tide of the match — they added another 109 runs to the chase before Tamim's valiant innings of 82 was ended, when he was caught brilliantly by Dinesh Chandimal off the bowling of Perera.

Sri Lanka, once again, reignited hopes of claiming victory after they claimed the wicket of Sabbir only a few overs later, leaving Bangladesh another 48 runs to chase with two new batters at the crease.

Shakib Al Hasan and Mushfiqur Rahim managed to add another 19 runs to the chase before Shakib was dismissed on 15, exposing the start of Bangladesh's tail and the tourists still requiring another 29 runs to win.

Shortly afterwards, Mushfiqur was given out LBW by umpire S. Ravi, but the decision was overturned on review, which proved to be a vital reprieve for the visitors.

The umpiring was below-par in this Test. Out of 21 decisions reviewed,10 were overturned. S.Ravi had 8 of his 13 decisions reversed!#SLvBAN

The very next over, Herath dropped a chance off his own bowling from Mosaddek Hossain, who then proceeded to drive Herath again which would lead to a boundary.

Mosaddek was eventually caught behind but it was too little too late. Bangladesh would only require two more runs to wrap up the match and the new batter Mehedi Hasan was given the honour of scoring the winning runs.

The only away success Bangladesh had tasted before this was against West Indies, but they have now beaten two major Test nations (England and Sri Lanka) in recent months, highlighting a team on the rise in the five-day format.

The limited-overs portion of the tour begins with the first of three ODIs on March 25, and all eyes will no doubt be on that series. Sri Lanka will look to avoid any further embarrassment.