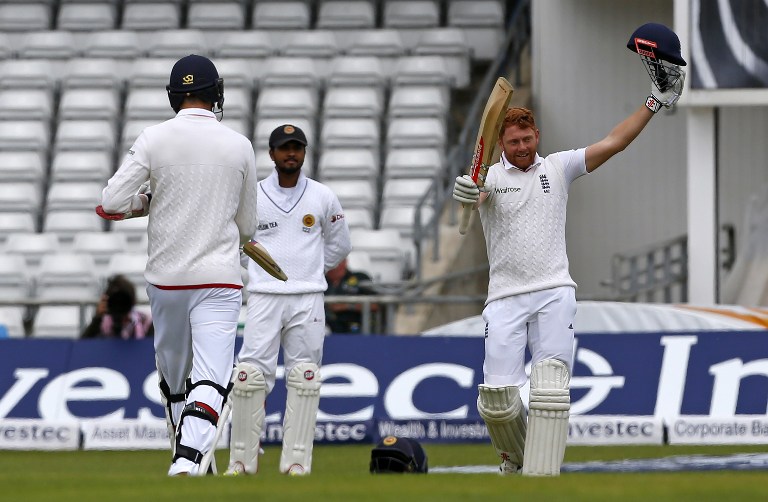 The second day's play of the first Test in Leeds began with Sri Lanka still in the hunt for a strong position in the match. It ended with them conceding to England all the ground they had gained with the ball on the previous day. The day was littered with mistakes. They could lose the Test inside three days.

Angelo Mathews placed fielders on the fence for a set batsman. Jonny Bairstow enjoyed the most of this by steadily accumulating to his third century at Headingley in as many matches. The Sri Lankan skipper's defensive tactics have become a routine part of his captaincy.

Shaminda Eranga and Nuwan Pradeep bowled well together. Had it not been for two dropped catches, Sri Lanka could have kept England down to a much smaller total.

The highlight of the day though was Sri Lanka's batting and the dream sequence that was Jimmy Anderson and Stuart Broad's bowling. There were good balls, poor shots, and odd thinking. In the end, it was a meek surrender by Sri Lanka. It was an all too familiar show.

Much depended on how well Sri Lanka's opening batsmen would do. They did not last long. Kusal Mendis found out just how good the bowling is at this level, while Dinesh Chandimal played a typical Chandimal innings. Nervy, unsure, prodding at top class bowling that only knows one winner.

Angelo Mathews briefly held it all together and, with Lahiru Thirimanne, he looked to repeat what Bairstow and Alex Hales had done for England. Then in an absolutely shocking moment, Mathews refused to review an LBW decision, when so much hung in the balance. It was Game of Thrones Red Wedding shocking. It was the creepy girl coming out of the TV in The Grudge shocking.

Thirimanne was under pressure in the match and personally, and played quite well. But, in a repeat of pretty much all of his dismissals in the last 12 months, he played a strange half-hearted lob to mid-on. But perhaps his most significant contribution was discouraging Mathews to review his dismissal.

Dasun Shanaka was not to have a similar debut with bat as he had with ball the day before — he departed to a searingly wonderful outswinger off his first ball.

In typical Leeds conditions, Anderson set about putting right his oddly poor returns at Headingley, where he averaged 40 before this game. Headingley embraced Anderson on this day,  as it put together its most favourable potluck of conditions to aid Jimmy on his way to a five-fer.

It was Anderson at his devastating best. He hooped the ball around the Sri Lankan top order to leave his opponents in disarray. You know what is coming with Anderson. Yet, batsmen all over the world continue to fall to his simple trap over and over again. He must now surely be considered an all time great in the bowling ranks. At one point, it appeared like a pig shooting competition between Broad and Anderson: who can get to five wickets first? Broad provided proof of why he is the number-one ranked Test bowler. In retrospect, Sri Lanka didn't stand a chance.

Match Situation
England hold all the aces at the moment.

Play of the day
Jonny Bairstow's third hundred in succession at Headingley.

Mahela Jayawardene Wisdom of the Day
Jayawardene is in the Sky commentary team for this tour. So we will keep our ears peeled for his wisdom.

"Murali would tell Mal Loye that he was a better batsman than him in his time at Lancashire".

Angelo Mathews's moment of the day
Not going for that review. Really? Two reviews in the bag, the best batsman in the side, the team slowly drowning; there are no words.