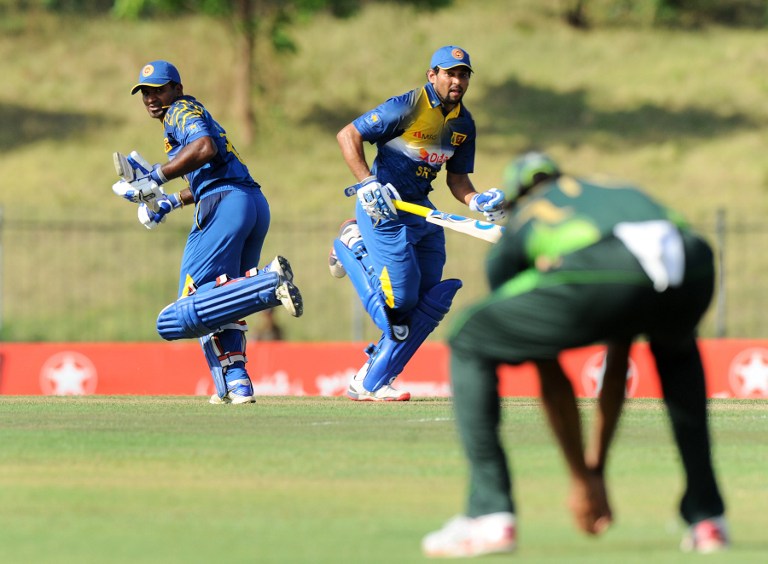 The tone setting partnership: Helped by a slow outfield and some terribly inept fielding from Pakistan, Sri Lanka cruised their way to an incredible opening stand of 164. Both Dilshan and Perera played some smoking strokes, with Dilshan being particularly harsh on the short ball, while Perera specialised in clean offside hitting, even at one stage smashing a cut shot straight into umpire Ian Gould's chin at square-leg.

Another collapse: Pakistan could only halt the rampant Sri Lankans with two run outs, but following Perera's fall after a terrific ton, Sri Lanka once again struggled to put together more than substantial partnerships and collapsed to 254/4 with just under 10 overs remaining.

Mathews and Siriwardana cash in: It was then the turn of the captain Angelo Mathews and new talent Milinda Siriwardana to right the ship, and that they certainly did with a stunning unbroken stand of 114. Both Mathews and Siriwardana took the aerial route to the Pakistani spinners and took paceman Ali to the cleaners at the death, smashing over 100 runs at the end of the innings to put Pakistan under serious pressure with a huge total of 368. Srirwardana brought up a maiden half century from just 25 balls, while Mathews was not out on 70 from 40 deliveries.

Pakistan's steady start: Through a largely risk-free approach, Pakistan's openers Azhar Ali and Ahmed Shehzad were able to keep the scoreboard ticking over in the first few overs of the innings. For the most part, the pair were able to ensure they hit the ball along the ground or hit the gaps in instances where they took the aerial route. But after the 50 was brought up, it was a stroke of poor luck that ended the partnership, as Shehzad was stumped by the narrowest of margins from the bowling of Sachithra Senanayake.

The second collapse brings Sri Lanka back into the game: The Pakistan captain kept his scoring at a brisk rate as the in-form Mohammad Hafeez came in and did the same, but his innings was caught short after attempting a poor single and the skipper was run out by his counterpart Mathews. This did not stop Hafeez (37) from giving the task a red-hot go. At 116/2 it was Mathews who again made the difference, snaring him LBW with a delivery that was just scraping the stumps despite his use of the review. Then it was Suranga Lakmal who hit the stumps and sent Sarfraz Ahmed on his way for 27. And after veteran Shoaib Malik was caught in close, Pakistan had slumped to 140/5 and were barely hanging on.

Sri Lanka mop up: Despite some small partnerships for the sixth and eighth wickets and a good cameo for Mohammad Rizwan, Sri Lanka did not let up enough on the accelerator to let Pakistan back into the game. In the end it was fitting that the destroyer with the bat from the first innings, Siriwardana, was the one to take the final wicket, having Rahat Ali caught by Senanayake for 4 to end the game.