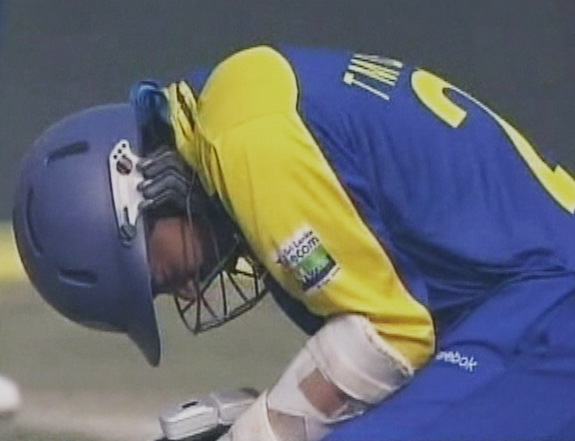 Tillakaratne Dilshan collapses after taking a blow to the elbow on a dangerous pitch at the Feroz Shah Kotla, Delhi, 2009.

The fifth and final ODI between India and Sri Lanka has been abandoned due to an unfit playing surface after 23.3 overs.

Several Sri Lankan batsman including Tillakaratne Dilshan and Sanath Jayasuriya took serious blows to the body before play was eventually called off.

A full house at Delhi could be heared jeering and booing in disappointment.

The umpires and officials at the ground are currently inspecting the adjacent pitch. That too however looks under prepared with blotches of unshaven grass.

The broadcasters who are wired into the current pitch also face issues if the officials decide to play on the adjacent surface.