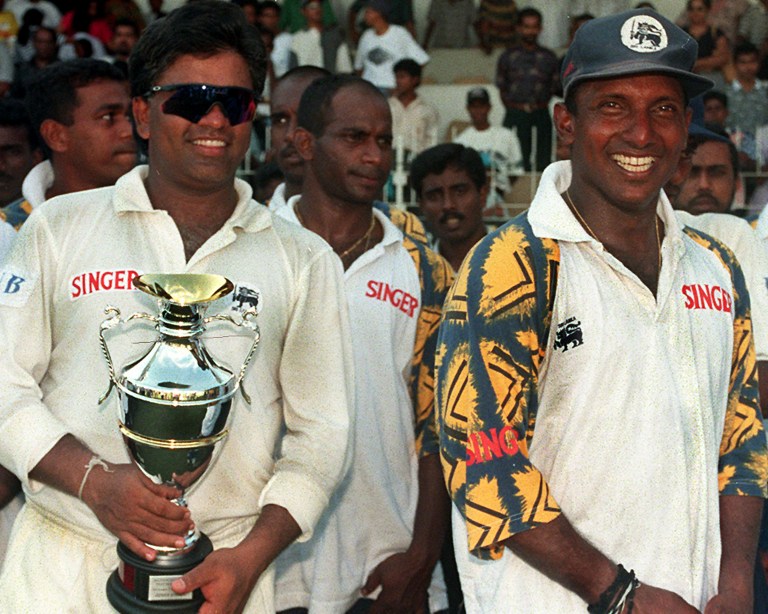 There is one simple reason why Sri Lanka cricket is where it is today, producing world-class players and constantly challenging for honours in major tournaments: our success in the ICC Cricket World Cup of 1996.

That tournament and its meaning is a line in the sand for the sport in our country. Before 1996 cricket was amateur. It was popular, but not a uniting force by any means.

But when we won in Lahore in 1996 that all changed. The success reached out to the future generations, showed them what could be achieved and allowed cricket to professionalise. It put Sri Lanka cricket on the map and we have been growing ever since.

People sometimes forget the backdrop to that tournament. Although we were one of the host countries along with Pakistan and India there was a civil war taking place and a big bomb blast in the capital city, Colombo, beforehand caused Australia and the West Indies to refuse to travel to play us.

We took those points as a result but still had to play India in India not once, but twice — including the semi-final at Eden Gardens in Kolkata. All the adversity brought everyone together though, and not just the players but the country as a whole. That is the effect we discovered cricket, and the ICC Cricket World Cup, can have.

The man who had the vision for us was, of course, Arjuna Ranatunga, our captain, along with coach Dav Whatmore. I hear former West Indies players still calling Clive Lloyd "skipper" now, long after they have all finished playing, and Arjuna was the same sort of figure for us. He had such belief in us, especially in sub-continental conditions, and in return we would run through a brick wall for him. He was the driving force behind the way we attacked the opposition.

Arjuna looked at Sanath Jayasuriya and Romesh Kaluwitharana, hidden away in the middle-order, and decided their power was wasted as often they might only have a handful of overs to bat.

It is true the ICC Cricket World Cup had seen pinch-hitters before, with Ian Botham and Mark Greatbatch used in 1992, but this was something completely different. Sanath and Kalu' were given license to attack and such was our belief in all our players that we were not worried even if they got out early. That gave them great freedom and they took advantage of it.

For me as a young player — I turned 24 a month after the final against Australia — the whole tournament was like a dream. We played brilliant cricket and the two innings by Aravinda, the semi-final effort of 66 from 47 balls after we were two wickets down in the first over, and his 107 not out in the final against Australia, were highlights. To play under the ultimate pressure and not only deliver but do so in the way he did was the mark of the man and also the best illustration of the way we wanted to play.

It was fitting Arjuna was with him at the end and hit the winning runs and my claim to fame was that I won the sprint from the sidelines to be the first to the middle to congratulate them!

If you said to me then that I would play in two more finals and not win either, then I am sure I would have been disappointed, but I can look back now with a feeling of satisfaction.  Only a handful of players have played in three finals and to stand as the second-highest wicket-taker in ICC Cricket World Cup history behind Glenn McGrath gives me a great feeling of pride because it tells me I maintained my performance over a long period of time.

Reflecting on those losing finals I do not feel upset or unhappy any more. In 2007 in Barbados we were beaten by an unbelievable innings by Adam Gilchrist and Australia were clearly the best side in the tournament. And although I ended as a loser again in Mumbai four years later — and a painful one too due to a groin injury I nursed along — I was still proud of what we achieved then as well. We lost due to the brilliance of MS Dhoni and dew and we had nothing to blame ourselves for.

My major World Cup let-down was 1999. We arrived in England as defending champions with a very good and experienced side and we simply did not deliver. We had won a One-Day tournament there the previous year, albeit in late summer, but we just never clicked. That was hurtful.

Can we win the title for a second time in 2015? I say 'Why not'? We have been just about the most consistent side around in major tournaments over the past decade, regularly reaching semi-finals and finals, and the win in the ICC World Twenty20 in Bangladesh will give the players huge self-belief.

In Kumar Sangakkara, Mahela Jayawardena and Tillakaratne Dilshan we have senior players determined to go out on a high and players who have the same quality and command the same respect as men like Arjuna and Aravinda did in 1996.

When you win a World Cup you do it for your country, for your team-mates and then for yourself, in that order. I have faith this group of players can achieve the dream again and I hope they have that faith too.