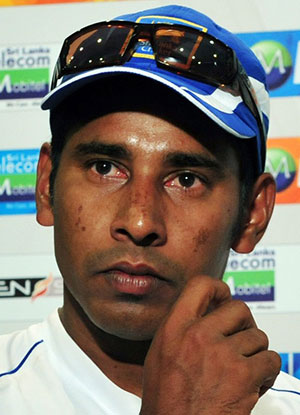 Russel Arnold responds to questions from fans in his weekly column
February 23, 2013

Why is Chaminda Vaas the right man for the job as fast bowling coach? — Dineth Somawansa

This is Sri Lanka’s most successful fast bowler we are talking about. Vaas was a work-horse in his day and he didn’t just survive, he excelled in conditions in Sri Lanka, which are not conducive to fast bowling. He most certainly has to be one of the masters of this trade. It makes a lot of sense to try to pick his brains if the opportunity is there. He is keen and you don’t want to miss such an opportunity.

What is your view of the Test squad picked for the Bangladesh series? What do you think of the two new captains – Angelo Mathews and Dinesh Chandimal? — Gregory Dias

It’s good that the selectors have gone for 20 players and young ones at that too. This would give youngsters the opportunity to train with and learn from the seniors. Even though they might not play, they will gain a lot through the experience of just being a part of the squad and being there. The squad is well balanced and addresses issues such as introducing youth to the national XI. Experience has not been compromised, while youngsters have been brought in expecting to cover many bases. Only time will tell if these players have what it takes, but I might have picked a couple of different names. However, on the other hand, you cannot fault the thought process of the selectors either. Dinesh Chandimal has proven to be a quick learner, so going with him as captain for T20s is not a bad option. The demands are not great at this stage at the T20I level and it will provide a good opportunity to see how he reacts to responsibility. His decision-making skills can also be judged. Angelo Mathews was the only one you could go to at this stage for the more demanding assignment of Test and ODI captaincy and he does have a good head on his shoulders. Hopefully, the responsibility will spur Mathews on to greater things.

What are the chances of SLC asking Chandika Hathurusingha to rejoin and will he accept? After Hathurusingha departed, our batting has slumped. When he served as shadow coach to Trevor Bayliss, we saw our top-order putting on consistent performances. — Praveen Samarasinghe

I think Hathurusingha will be more than happy to join the team. With the experience he has got now, I would think SLC should be looking at him as head coach rather than just a batting coach. I do think the chances are high that this would happen, as misunderstandings do happen, but people also do move on and that would be the same in this case too. Of course, there are also contracts in place with the current coaches at this stage and you do have to wait for the right time to make these changes.

During your time as a player for Sri Lanka, did you prefer foreign coaches or local coaches, and why? — Roy

Generally, the issue is that we don’t have respect for our own. If an outsider does say anything, even if it does not make sense, we jump to it. I really did not have a preference. I’ve had good coaches both foreign and local. I now feel that there are capable coaches in Sri Lanka who will be more passionate about the role, knowledgeable and tactically fantastic. We should look to these personnel to take Sri Lanka forward. Respect them for who they are not only as players, but administrators too. It’s good to see that old trend changing in Sri Lanka.

Why are players from the eastern province not considered? There is a lot of talent there. — Natkunasingam Shabinthan

Cricket is now finally reaching these areas, which were no-go zones a few years ago. With the Murali Harmony Cup and other initiatives, players from these parts are getting an opportunity to come into the system now. More time is needed though. Hopefully, soon, we will have players from all corners of the island competing in first-class cricket and thereby pushing for selection. At this point in time, there is no way you can identify them unless they move to Colombo to play a higher standard of cricket.

Going back to one of your answers in last week’s column, you said cooler weather helps seamer-friendly tracks, so don’t you think that Sri Lanka has missed a trick by not developing Radella in Nuwara Eliya as an international venue, which would not only have helped our batsmen, but even bowlers perform better in seamer-friendly, swinging conditions? In my opinion, if the Sri Lanka team had the opportunity of playing in Nuwara Eliya regularly, some of the terrible performances overseas in seaming conditions could have been limited to a certain extent. What is your view? — Suresh Perera

The cooler weather and moist conditions are factors worth considering, but building international stadiums up there will have other issues too. Can it be sustained and is it feasible? I’m not sure if grounds in these areas can draw in large crowds and be filled, especially when you struggle in other more conveniently-located venues to have full houses these days. You could experiment with a practice facility though, but nowadays, with schedules so tight, players hardly have any time to go to the nets. We have also had instances where players have been late for tours too. But your line of thinking is fair. Swing can be achieved in humid conditions as well as overcast conditions, but the main issue still will be how to produce and replicate the extra bounce seen in countries like Australia and South Africa, more than movement in the air or off the track.

Why do you think Angelo Perera was not selected for the 20-man Test squad against Bangladesh, and why does Kithruwan Vithanage deserve selection before him? — Ruvin Daniel, Supun Perera and Sanjeeve Navaneethan

I am pretty sure the selectors have taken note of Angelo Perera. Age is on his side and it’s not the end of the world that he missed out. Both Kithruwan and Angelo were identified as talented youngsters, but there was a problem with Angelo playing quick bowling, which he has rectified now. In the selectors’ minds, they feel that giving Kithruwan the exposure at this stage is best going forward, therefore, they have gone for him. I do not see that as an issue at all. It wont be long before Angelo gets a break. It’s also up to him to be in the selectors’ face from now on with solid performances.