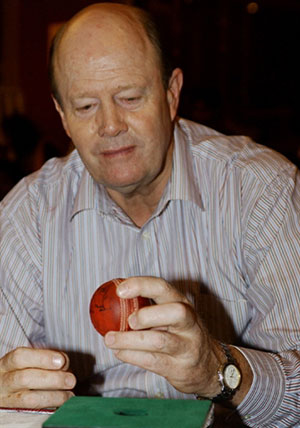 Russel Arnold responds to questions from fans in his weekly column
November 4, 2012

Can you give us an update on your fellow commentator Tony Greig’s condition? He said he was checking into hospital for more tests to determine how series his lung cancer was. — Ricardo P.

Tony spent two weeks in hospital and was back home and sounding very positive when I spoke to him a couple days ago. He was still waiting on the results of his tests to determine where exactly he stood. He is a strong man. His wife and family have been a rock to him. He is taking stock of things and hopefully will back in the commentary box soon.

Considering his style of play and the fact that he takes time to settle in and doesn’t have the big shots, do you think Kumar Sangakkara should be in Sri Lanka’s T20 side? Is it time for a new wicket-keeper with more aggression to take over? — Muditha Hasthila Nanayakkara

The question is, who? Sangakkara is ideal at the top of the order, plays very good shots and is useful. But, moving forward, who do you pick instead of him? That’s the big question. You also cannot look at other teams and look for players they have. Sri Lanka has to make the best of the players they have and come up with their own game plan. It’s always useful for your keeper to be a good bat, but he does not need to be a big hitter.

In the past, Sri Lanka were successful in unearthing several left-arm fast bowlers. They had Chaminda Vaas and Nuwan Zoysa during the time you played. Why don’t we have left-arm seamers in our T20 side and ODI side today? There are left-arm fast bowlers who are not being used like Chanaka Welegedera (who plays Tests only), Thilan Thushara, Chathura Peiris and Charith Jayampathi who all play first-class cricket. I am asking this question because many right-handed batsmen struggle against left-arm pace. We are currently doing good, but this variety we had for years is missing. What do you think about this variety missing in the current squad? — Jana Jude

You are spot on when you say a left-armer will be useful. They will always cause problems with the different angle they use and they give the bowling unit variety. There are left-armers around, but we really don’t have quality left-arm fast bowlers at this stage. It’s not an issue with just the left-armers though. Our fast bowlers need to be fit too and them breaking down is an issue Sri Lanka have been faced with lately. Welegedera is up there, but he is being protected for Test cricket for that reason. Thilan Thushara was a decent find who had pace and was the goods, but sadly did not have the resilience to keep producing the same results he did early in his career. To fix this, it is not about looking at left-armers alone, but it’s about focusing and working on the pacemen. And, of course, giving them match practice at domestic level so they could stand the rugged road of international cricket is what needs to be done.

Do you think Lahiru Thirimanne is T20 material? Do you not think that a batting spot is being wasted by playing him instead of Dinesh Chandimal, Upul Tharanga, Dilshan Munaweera, or even uncapped players such as Bhanuka Rajapaksa and other youngsters? During the T20 World Cup, whenever Tillakaratne Dilshan, Mahela Jayawardene and Kumar Sangakkara got off to a good start and batted for 15 or 16 overs, Thirimanne was sent right down the order below Thisara Perera and Nuwan Kulasekara. By trying to hide him, what advantage does he bring to a team, when he does not even bowl? — Athiq Nizam

I think Lahiru is a quality player and will come into his own in time. He has played quite a few useful innings down the order and strikes it cleanly and handles pressure well. I would not pick any of the others ahead of him, as he has a role to play in that middle order. In T20s, it’s about being flexible with your batting order. When things go well, you use the big hitters. When you need to work hard and support the top order, you use players like Lahiru who I believe will have a bigger role to play as the seniors move on. He also can be used in different position unlike the others. When picking the team, he was the ideal man to compliment the strengths Sri Lanka had.

Do you not think Sri Lanka will have problems with their quick bowlers on their tour to Australia later this year? Nuwan Kulasekara will not get much bounce? — Ayan Patsa

To trouble batsmen in Australia, bounce is needed. But it’s not only Kulasekera, all other Sri Lankan bowlers will struggle in that aspect, as we do not have tall fast bowlers to generate that extra bounce. A bigger concern for Sri Lanka will be to have fit fast bowlers to bowl through the series. Harder surfaces to land on in Australia and more overs to bowl than they are required to bowl in the subcontinent makes it a tough ask for them to be injury free. When it comes to injury, our fast bowlers’ track record has not been promising.

Australia named a 12-man squad for the first Test against South Africa, what happens in the event they lose two players to injury? — Shashika Atapattu

If they lose two players prior to the Test, they simply call the next in line to the squad. Of course, there are other reserves from the host state that they would use as fielding replacements etc. So, they can just chuck them in if two players break down during a game.

Why do you always praise Jeevan Mendis and Rangana Herath? — Hasitha Ranawaka

Any reason I should not? Jeevan has been good for Sri Lanka of late. If you are looking at a score sheet and questioning me, you are on the wrong track. Considering where he bats in the shorter game, his contributions should be judged in the context of the game and not compared to the top-order players. On the field, he is such a live-wire. Rangana has been Sri Lanka’s leading spinner. He has done a remarkable job for Sri Lanka and he is a quality spinner. Even though he will never fill the boots of Murali, he has won and will win matches for Sri Lanka.